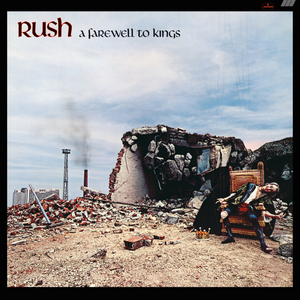 "A FAREWELL TO KINGS"

A FAREWELL TO KINGS - Geddy Lee's vocals are a little Marmite, you either love them or hate them, a bit like Axl Rose of Guns N' Roses, sometime screeching to full volume.  This opening track starts off a little medieval before rising in volume and pace with searing guitars and crashing drums. At just after the 3 minute mark there's even room for a little kind of funky instrumental interlude with slap bass smashing into full on Classic Rock mode.

XANADU - This has its very mysterious opening with gradual Progressive guitar building in stature.  The vocals don't come in until around 5 minutes in so its basically a musician's masterclass.  As with most Rush songs it sounds like there is so much going on and so many instruments battling for supremacy.  It ebbs and flows with Heavy Rock leanings to Acoustic and it keeps you enthralled.
CLOSER TO THE HEART - One of the songs I heard my brother playing and strted me listening to this band more.  An absolute cracker of a song.  The chorus can be sung along and its probably a rare outing for Rush to do basic Classic Rock track that fits radio but it is a classic.

CINDERELLA MAN - Not a big favourite of mine, but it has a nice, steady chorus and at 2 minutes or so there's a great druma and guitar battle with a searing guitar solo.  not as melodious as the previous tracks for me.

MADRIGAL - A really lovely song, great emotional vocals from Geddy, a slow tempo Rock ballad, only 2 minutes 35 and I wish it was longer, I really like this track.

CYGNUS X-1 BOOK 1:THE VOYAGE (PROLOGUE,1,2,3) - A 10 minute epic to finish the album.  Very sci-fi and mysterious.  Apparently about a character looking round his spaceship at the centre of a Black Hole. More synths and effects in this track with the usual Rush guitar and drums base.  At times mysterious, eerie with little snippets of Punk, Classic Rock and sometimes manic vocals from Geddy.