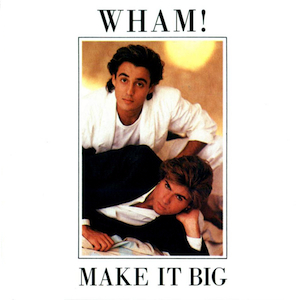 WAKE ME UP BEFORE YOU GO-GO - The opener to the abum was a 50s/60s inspired uptempo Rock and Roll/Pop crossover that would encourage every listener to try and stop themselves from singing the infectious chorus.

EVERYTHING SHE WANTS -  For me is one of George Michael's best lyrical songs.  It's not a ctchy Pop song, it doesn't have a catchy chorus, its composition keeps changing in the song, for fans of songwriting like myself though, the lyrics are brilliant.  This was a taster for the brilliant mature songs to come as a solo performer for George.

HEARTBEAT - This has elements of a slowed down  "Freedom" hidden in the track but its ultimately a Motown Soul song similar to the greats of that genre in the 60s.  It showcases George's blossoming vocals and also his carrying of songs with a minimal backing.

LIKE A BABY - In my opinion is the weakest track on the album, it meanders along and doesn't really light up in any way towards the end, I am sure George looking back could have included something better, although the quality of the album was a high one.

FREEDOM -  The third single from the album was a kind of Motown sounding track, which became a massive hit and the 10th best selling hit in 1984's year end charts.  The vocals and melodies changed throughout and maybe wasn't as much a sing-a-long as "Wake Me Up Before You Go Go" but its still a great Pop song.

IF YOU WERE THERE -  A cover of the Isley Brothers song is a touch of class.  Proving that George could turn his hand to any genre, this R n' B Soul classic is given an updated feel and unlike many cover versions this one works.  A song with a chorus that is instantly in your head also shows Geroge chooses songs that live long in the memory in the most part.

CREDIT CARD BABY - A little Jazz Swing feel complete with some brass to help it along.  Its a midtempo bright and breezy song which goes great with the theme of the album.

CARELESS WHISPER - As a single, credited to George Michael for the first time and it was the perfect Pop ballad.  Breathy vocals from George for the most part with a fabulous saxophone riff throughout the song.  Full of emotion and a really classy love song, one of, if not THE best from George in my opinion.