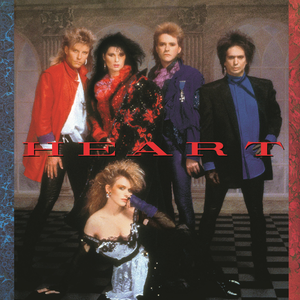 IF LOOKS COULD KILL - The album opener, and a typical 80s hard rocker, lots of searing guitars and a pumping beat, with a catchy killer chorus and this is a gem.  Classic Heart.

WHAT ABOUT LOVE - Originally recorded by Canadian band Toronto, this is the best known version.  An anthemic orchestral-like Rock ballad, Ann Wilson's booming and awesome vocals bring this one to life, great song.

NEVER - A bright Pop Rock number with a backdrop positive message about being uplifted after being discouraged by love.  A lovely song that again is lifted by Ann's superb emotive vocals.  Keyboards and guitars mix that was popular in radio friendly Rock music at the time.

THE WOLF - This is going back to earlier albums, straight forward Classic Rock at its best.

NOBODY HOME - Close to a Power ballad, no catchy chorus, but Ann's passionate vocals lift this pretty basic track to new heights.  There is a nice guitar solo midway, a nice song.

NOTHIN' AT ALL - Pop Rock which reminds me of Bangles' tracks, gorgeous melodies, uplifting vocals and harmonies.

WHAT HE DON'T KNOW - A more Pop oriented track, nice guitar solos, a simple composition but it works.  Classy track that could have easily been a hit with adding to the five singles already released from this great album.

SHELL SHOCK -  The last track and ironically probably the weakest track on an album of so many classics.  Not a complicated composition, obviously a filler and even Ann cannot save this one.  It has some rocky moments especially the guitar solo but the lyrics aren't great and neither is the rest of it.