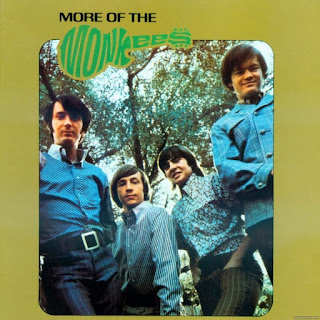 SHE - The opening track sung by Micky Dolenz is a mix of Progressive, Psychedelic Rock and Beat Pop.  Great opening track, mid tempo and punchy and a memorable chorus.

MARY, MARY - One of my favourite Monkees' tracks again sung by Dolenz.  Great guitar Pop Rock, simple hooks and chorus but it packs a punch.

HOLD ON GIRL - Eerie and experimental, almost Folk Pop track sung by Jones with off key backing vocals and a Psychedelic keyboard solos.

YOUR AUNTIE GRIZELDA - Another experimental tune, the first released song with Peter Tork taking on the lead vocals.  A persistent Rock keyboard leads the way through the song.  Its humorous, quirky and Tork makes a variety of sounds during the instrumental break to mx it up crazy style.  Can't help but like this its so mad.

(I'M NOT YOUR (STEPPING STONE) - Originally a song by Paul Revere and The Raiders but The Monkees made the most popular version.  Dolenz again on lead vocals this is 60s Progressive Rock and one of my favourites from the band.  Awesome track.

LOOK OUT (HERE COMES TOMORROW) - Sung by Jones and written by Neil Diamond, who apparently played Acoustic guitar on the track.  Great minimal sounding focussing on the vocals, 60s Pop at its best.

THE KIND OF GIRL I COULD LOVE - Michael Nesmith takes over the vocals on this Country Blues track.  Catchy and a foot tapper.

THE DAY WE FALL IN LOVE - Strange orchestral song with whispered repetitve vocals from Jones.  Didn't really get this one at all!

SOMETIME IN THE MORNING - A nice, laid back Pop ballad sung by Dolenz.

I'M A BELIEVER - One of biggest hits of the 60s, the classic track written again by Neil Diamond (again helping out on Acoustic guitar).  Sung by Dolenz its a mid tempo Beat Pop track that builds in crescendo to that memorable chorus and everyone of my generation and probably others can't help but sing along to it.  A classic.