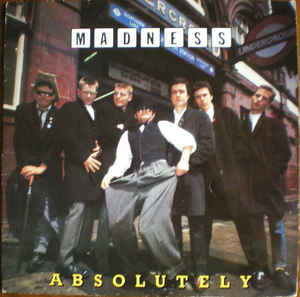 BAGGY TROUSERS - The opening track was the one that got me hooked on Madness, I wasn't really into Two Tone or Ska at this point but their qurky sound was so unique.  It was a slice of infectious Pop with a little Punk, and the catchy qualities of Pop.  Sheer class.

EMBARRASSMENT - A darker tone on this track, and a little more New Wave Pop than previous Madness tracks.  It was apparently about band member Lee Thompson's sister being pregnant by a black man.  Although the lyrics were darker, the slightly upbeat music kept it light.

E.R.N.I.E. - This is a "nursery rhyme" style chirpy little Ska ditty that is thoroughly engaging and experimental with almost fairground style backing.  Also the backing vocals make it sound a little more Punk.

CLOSE ESCAPE - This is more a Ska Punk track.  Reminds me of Ian Dury and that style of quirky jagged tempo.

NOT HOME TODAY - The beat and vocals here are up and down, it bounce along nicely but its not one of my favourites.  The brass arrangements are cool though.  More instrumental but not engaging enough for me.

ON THE BEAT PETE - A kind of New Wave Ska track, with fast tempo lyrical rapping by singer Suggs over the top of a repetitive pounding beat with harmonised chanting vocals.

SOLID GONE - A strange one for this album and the band.  Its a pure Rock N' Roll uptempo foot tapping track.  Another unusual thing is that Chas Smash sings lead vocals!

TAKE IT OR LEAVE IT - A kind of Punk Pop track, again with that "fairground" style musical backing, and a percussion interlude.  It is a bit of a filler on this album I think.  Its only engaging for the previously mentioned backing, not much else going on.

SHADOW OF FEAR - Another dark track with a dramatic musical Ska backing, supposedly about a stalker.  Not a favourite of mine, its meanders along a little.

DISAPPEAR - Sounds like a Ska Pop jam, catchy and minimal, almost Acoustic, great moments all over, could have been a single.

OVERDONE - Another track that fails to grab me, probably because the standard on this album is high.  Its not very memorable and is very patchy, possibly an experiment to add on to the tracklisting.  Has a bit of everything but no real construction.

IN THE RAIN - This track could also have been a single for me.  The catchy Ska backing and the quirky nature of the track make it on a par with what we were given with "Embarrassment" and "Baggy Trousers".

YOU SAID - A more melancholic song for the most part with alternate uptempo snippets, more poppy than certain tracks but also a little Reggae.  Interesting track.

RETURN OF THE LOS PALMAS 7 - The final track is a crazy, madcap instrumental with the odd adlibbing dialogue.  Its almost old style ballroom music with a Ska twist.  Actually reached number 7 on the UK chart.  One of those instrumentals that makes you smile.  A nice end to the album.