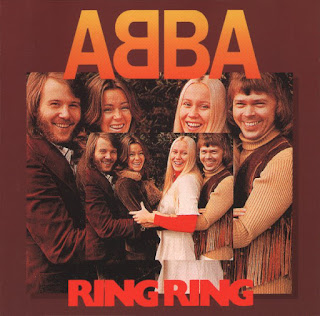 "RING RING"
1973
RING RING - The title track is one of the earlier memorable songs from the ABBA catalogue.  A perfect slice of Europop which gave ABBA their breakthrough in several European countries at the start of their career.  A simple mid tempo musical backing with one of those classic, memorable, catchy choruses for which the band became famous, made this a great start of this Pop phenomenon.
ANOTHER TOWN, ANOTHER TRAIN - A melancholic, gentle Folk Pop ballad.  Laid back, melodic, easy listening track that lilts along nicely.  Bjorn Ulvaeus takes lead vocals with the usual singing ladies, Agentha Faltskog and Anni-frid Lyngstad backing up on the simplistic chorus.
DISILLUSION - The only ABBA released song to have a songwriting credit to Agnetha.  She takes lead vocals too on this rather beautiful Pop ballad.  A really nice song giving Agnetha full rein to guide it with her vocals.
PEOPLE NEED LOVE - A Folk Pop track with a Euro influence.  The debut single when ABBA were known simply as "Bjorn & Benny, Agnetha & Anni-frid.  Not knowing if there was even going to be an album or a band this was included on this debut from "ABBA".  Catchy, positive track with a memorable chorus.
I SAW IT IN THE MIRROR - This track isn't the best from a superb catalogue of ABBA tunes.  It is not one of my favourites and by all accounts also by fans.  It meanders along in dirge-like fashion.  Hardly any distinguishable features that lift the song.  The girls try to lift it but it is hard work.  A disappointment, thankfully their songwriting improved over the years!
NINA, PRETTY BALLERINA - A cutesy, quirky little Europop midtempo, almost child-like track.  Nice enough but not one of their best.
LOVE ISN'T EASY (BUT IT SURE IS HARD ENOUGH) - A little Country styled song with a Folk vibe.  There are moments where it almost rocks up a gear.  A little repetitive and not in a good, catchy way.  An 'ok' song by this legendary group's standards.
ME AND BOBBY AND BOBBY'S BROTHER - Lyrically quite child-like but then this was the band's first album where the songwriting craft was still to perfect.  A Folk style Pop track that clearly is a filler.
HE IS YOUR BROTHER - All four members join in with this track, a great track that has a little of everything that made ABBA famous.  Pop and Rock moments with some great melodies and harmonies.  A little heavier Country Rock track.
SHE'S MY KIND OF GIRL - This track was actually released in 1970 as a Bjorn & Benny single.  It only features the two guys and is a kind of Simon & Garfunkel/Everly Brothers track.  Nice 60s style Folk Rock with a great melody and harmonies.
I AM JUST A GIRL - Agnetha I think on lead vocals but she fails to lift this dour Jazz chanteuse style track.  Disappointing and uninspiring.
ROCK N' ROLL BAND - A great track, obviously has elements of Rock N' Roll but also Country and Pop Rock.  Its almost Progressive Rock style ends the album on a high.  Love this track.