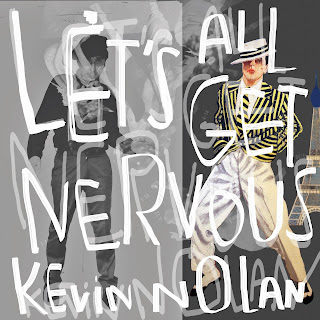 "LET'S ALL GET NERVOUS"

THE DEAD-BEAT - An eerie, atmospheric, effects laden opener to the album.  A basic robotic style intro picks up pace behind a spoken narrative.  Elements of Iggy Pop, Tom Waits and Kraftwerk with a little Gothic Rock influence make this sparkle.  At the 3 minute mark the tempo and depth increases with a funky upbeat segement with reverb echoed effects to the end.  Hard to define a genre when it incorporates so many in one song! Interesting experimental start to the Irish star's second album.

HUMAN STORY (Stet) (featuring Mick Pyro) - Intro reminds me a little of INXS backing and Michael Hutchence vocals or maybe Matt Johnson's The The.  A kind of funky Rock opening merges into an Electronic Punk style with interspersed effects.  Another song breaking a few genre boundaries.  A little 60s/70s Progressive and Classic Rock, with late 70s, early 80s New Wave Electonica.  It shouldn't work but it does.  Keeps you engaged to the end wondering where the song is going to go next!  Great track!

THE RECEPTION OF AN ENGLISH PLAY IN PARIS (featuring Vyvienne Long and Alabaster DePlume) - This track kicks off in melancholic fashion with some cool, slow Jazz piano.  The laid back throaty vocals work perfectly with the emotive and romantic movie style backing.  Strange but utterly engaging.

BOW THE LYRE - The album tempo quickens again with this track.  Electronic drumbeats merge with Hendrix style guitar riffs and vocals that bring up Iggy Pop to mind.  At the 1 minute 50 mark the pace goes up a gear with some electronic pulses giving the pumping beats more density.

ICH ATME DICH EIN (featuring Alabaster DePlume) - Seems to be fully in German language so as a non-German speaker I can only review the music as I hear it.  If the lyrics were in English I may have got a fuller emotive mood of the track.  The piano led backing music is pleasant on the ear and would be an ideal backdrop to an old style black and white romantic movie scene.  An all round nice listen despite me not understanding much of the lyrics.

THE COMING OF COMPLETE NIGHT - At almost 10 minutes long this is the epic final track of the album.  Has a slow tempo echoed funky intro with angst ridden vocals driving the song.  This is probably my favourite track of the album as it feels like it was rough, adlibbed, spur of the moment, experimental jam.  I don't know if it was but it sounds that way and its brilliant if it was already planned beforehand.  Its cool "live" feel gives this laid back track a real lift and the guitars keep it kicking along.  Sit back, relax and let this track surround you.  By the way, listening to this in headphones enhances the effect of a live jam! Awesome end to an unusual album.