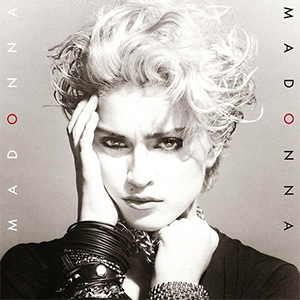 "MADONNA"
LUCKY STAR - The opening track is a Disco Pop song, which became her trademark for this debut album before moving into more Pop areas in her next few albums.  Its mid tempo beats and twangy guitars and elctro synths made this an accessible staple to radio airplay connecting to a variety of listeners.  Classic Madonna.
BORDERLINE - A change of direction after the first upbeat song, this is a kind of Pop ballad set to a Disco track.  Some lovely harmonies and became her first top ten hit in the USA.  A Reggie Lucas written composition and it gave Madonna chance to explore her vocals and conveying emotion in her songs.  One of my favourites.
BURNING UP - One of my top songs by Madonna.  Similar to the later "Gambler".  It is a fast paced Disco beat laden track with a rockier twist with random guitar riffs.  A real gem.
I KNOW IT - This track is keyboard led and has a nice 60s Pop/Rock N' Roll vibe akin to the later "True Blue".  A catchy chorus and an accomplished composition from the pen of Madonna.
HOLIDAY - The Disco classic and staple of many a party in the 80s and even now.  Classic Madonna Dance track with its midtempo beats and summery sound merging with a very catchy and memorable chorus.  Just brilliant.  Written by Curtis Hudson and Lisa Stevens of Pure Energy.  After Madonna was given this song and accepted it she never looked back!
THINK OF ME - Similar in vein to "Lucky Star" but it lacks a little something for me.  A nice Saxophone solo but doesn't grab me and hasn't since I first started collecting Madonna records.  Its always one of those songs I skip.  Maybe its because this debut album has some classics its just not up to speed.
PHYSICAL ATTRACTION - The second song on the album written by Reggie Lucas, its a slower Disco Pop track like "Borderline".  I always liked this ong but thought it was a little too long and a short, sharp 4 minute track would have sufficed.  Its overlong at over 6 minutes.  Good for the Dance officianados though!
EVERYBODY - The debut single from Madonna did not strike a chord with critics on first release in the USA.  Its a little R n 'B, a little Pop and a ltitle Disco.  The soulful style was supposed to draw her to more black audiences but it was a slow burner.  Some suggested the single sleeve should have had Madonna's face on the cover to make her "the face of the 80s".  I love this, always have, great song, catchy chorus and unique.