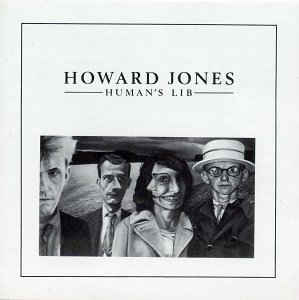 "HUMAN'S LIB"
1984
CONDITIONING - The debut album from one of the 80s pioneers of Synth Pop opens with a very Kraftwerk-esque track.  It's minimal lyrics and equally minimal sound add to its charm.  Its quirky rhythm and experimental blips and squeaks surely nod to the German masters' work.
WHAT IS LOVE? - The second single that reached number 2 in the UK chart.  This was a much more polished almost New Wave kind of Synth Pop track.  Atmospheric and with a very catchy and memorable chorus make this one of the best songs of the 80s and also of Jones' catalogue.
PEARL IN THE SHELL - A great track, not as popular as some of his big hits but this is a funky, kind of jazzy New Wave style song.  There is some nice saxophone by The Blockheads' Davey Payne.  It is unique and has a little of everything which makes it special.  Not as catchy a chorus as usual but the beat and jaunty style merging with the big and brash saxophone lift it to bigger heights.
HIDE AND SEEK - A big change from the opening three tracks, this is a moody and melancholic track.  Its eerie, medieval and gothic ambience add to its mystery.  Its positive lyrics somehow work even with such a dour and dark backing.  You wouldn't expect this emotional track after the start the album made, classy move though.
HUNT THE SELF - A hybrid of Kraftwerk and The Cars.  Its a New Wave Rock tinged Synth Pop track.  Could have been a single in my opinion.  Upbeat and has a great thumping crash of drums towards the end which I wished had carried on a little longer.  Another gem.
NEW SONG - The debut single and the first song I heard of Howard Jones.  I just thought how unusual it was.  A really nice, uptempo gentle melody with bouncy vocals.  The Synth Pop I had heard before this was usually quite moody such as The Human League etc.  This track opened my ears to New Wave and to this new Synth Pop style.  An absolute classic and one of my favourite tracks of the 80s just by its sheer uniqueness.
DON'T ALWAYS LOOK AT THE RAIN - Not one of my favourites, it drags on a little too long.  Its like a Progressive Rock style track set to a Synth Pop base. Reminds me of the older music by the likes of Peter Gabriel etc.  Not a fan of this.
EQUALITY - Back to the good stuff with this song.  An atmospheric, at times upbeat then slowed down before coming back up again.  A brilliant slice of melodic Synth Pop at its best.  Turn the volume up for this one, its a scorcher.  Apparently this track was only released as a single in South Africa, noting the title I expect.  Another of my favorites, surprised it wasn't a single anywhere else, would have been massive.
NATURAL - A nice, easy going, relaxing track, has a little of the 3 singles combined, "New Song", "What Is Love?" and "Pearl In The Shell".  It isn't as catchy as those three but its a cool song.
HUMAN'S LIB - The album ends as it began, with a Kraftwerk-inspired track.  Almost like a slowed down "Tour De France" rhythm with a lovely overdub and minimal lyrics.  A fine debut to one of the 80s most creative stars.