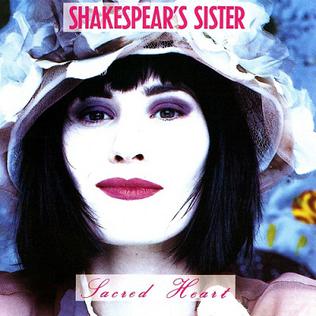 "SACRED HEART"
1989
HEROINE - The opening track to this debut album by the duo of ex-Bananarama singer Siobhan Fahey and Marcella Detroit is ab experimental masterpiece.  The driving beat carries a Synth Rock track akin to INXS, while the vocals are a hybrid of Punk and Goth.  It is dark but poppy, eerie but quirky and a storming introduction to the band.  Any Bananarama fans hoping for cute Pop songs were in for a shock.
RUN SILENT, RUN DEEP - This track slows down the tempo a little, its a beautiful slice of Electro Pop.  Gorgeous harmonies and melody and a memorable chorus. It is also a little Dream Pop in style.  Nice.
DIRTY MIND - A fast based mostly drum and bass dance track.  Sexy, breathy vocals and some slight funky Prince "Kiss" like guitars don't really carry it for me, not a favourite of mine. I am sure the kids in the clubs loved it but after the first two glorious compositions this is a disappointment.
SACRED HEART - The title track is a typical 80s New Wave Pop Rock track.  It is a little moody, atmospheric and Siobhan and Marcella's vocals intertwine beautifully.  This reminds me most of a Eurythmics song, ironically although Dave Stewart married Siobhan two years earlier he seemingly had no part in this album.  Maybe just an influential observer?
HEAVEN IS IN YOUR ARMS - I really like this track, its a lot more rocky than the previous tracks, proving that no genre was out of reach for these girls.  Its pumping beat and mean and moody premise with funky moments make this a great track, also reminds me of INXS once again.  Sheer class.
TWIST THE KNIFE - This track reminds me very much of Siouxsie And The Banshees.  It definitely has a New Wave Punk vibe going on with some Siouxsie-esque Gothic vocals from Siobhan.  Another favourite of mine.
YOU'RE HISTORY - The second single from the duo and it reached number 7 in the UK chart putting them on the map.  A great Pop Rock song, with the brilliant Marcella operatic vocals on the chorus making it unique.  Its funky, its rocky and its radio friendly and appeals to all genres.  Superb, proves to me that Siobhan was far too good too talented and creative to be in Bananarama, no offence to their fans or them, by the way! Production by Eurthymics' producer Jimmy Iovine is exceptional.
BREAK MY HEART - Originally the debut single twinned as a double A side with "Heroine".  This is a fast paced Electropop track merging with Pop Disco, 80s style.  Its engagingly catchy and very much a powerful dance track should you be so inclined.  I just think it is a great upbeat track, second only to "You're History" as the best song on the album.
RED ROCKET - An absolute cracker of a track.  Its got a fantastic beat, searing guitars, its pretty much got everything.  There is Rock, there are hints of Motown Soul, R n'B and New Wave Electronica.  Apparently The Gap Band's Charlie Wilson provides a great back up vocal to the two girls.  A gem.
ELECTRIC MOON - A quirky little track, that has a hintof a bluesy feel.  The minimal music backing allowing Siobhan and Marcella to do their thing, it sounds amazing.  The experimentality of this album doesn't feel experimented at all, more a very clever, ingenious plan from the start.
PRIMITIVE LOVE - This track is very Glam Rock in style, the big drums throughout and the repetitive chorus with "ah ah" additions.  Its big and brash, has a little "Spirit In The Sky" vibe but also The Sweet and Marc Bolan.  Good stuff.
COULD YOU BE LOVED - An unusual cover version of Bob Marley And The Wailers' 1980 hit.  The chorus is still there and its a good song.  My only criticism would be that its "too" electronic.  The nice, upbeat, Reggae style has almost disappeared.  An unusual but brave choice.  It works in places but not in some others.
YOU MADE ME COME TO THIS - The Human League meets Dead Or Alive in this track.  Its a pounding Electro beat with a Synthpop background.  This track finishes this album strongly and sets up the band for what was to come with the next album, "Hormonally Yours" with the classic "Stay".  This is where it all started.