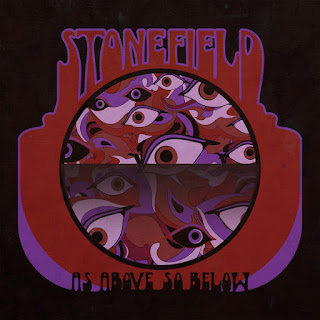 "AS ABOVE, SO BELOW"

SISTER - The Aussie foursome of sisters Amy, Hannah, Holly and Sarah open up their second album with a bang.  It's an almost Gothic Progressive Rock track with its dark undertones and moody effects. Hannah does her best Ozzy doom and gloom vocals to good effect.

DREAM - Ironically this has a dreamy kind of vibe going on.  Its a 70s Psychedelic Rock ride with elements of 90s Grunge.

CHANGES - Love this track, it reminds me of Bangles with some great melodious riffs and sultry Susannah Hoffs-like vocals.  Great Pop Rock with some slightly heavier moments hidden in the track especially towards the end.  Super track and shows the girls' growing maturity and musical knowledge.

LOVE - Another Bangles-type track, but a little more mellow than the previous track.  Really nice song and some pure guitar! The interplay between the guitar and keyboards is rather beautiful.

EYES - The girls have mastered the art of merging sounds, the keyboards section around the 3 minute minute is pure 60s inspired Psychedelic Rock flower power style.  The rest of the track is Progressive and Classic Rock intertwined.  Class.

HIGHER - This track reminds me of early Berlin, making that crossover between Pop and Hard Rock, another gem.

MIDNIGHT - A Dream Pop style song akin to a Sc-Fi movie backdrop.  Its a laid back, easy listening song that gives you an image of some space age future. Nice.

LONELY - A quite moody but somehow emotional and uplifting track with its core backing music very Middle Eastern or Asian.  A really great, mature Rock ballad.

EAGLE - An effects laden, mysterious, eerie track to finish.  It is veru medieval to start and dreamy and then turns into something quite dark and gothic.  The girls are not afraid to experiment and test their skills so as not to be a one trick pony.  Great sequel to "Stonefield" the debut album.