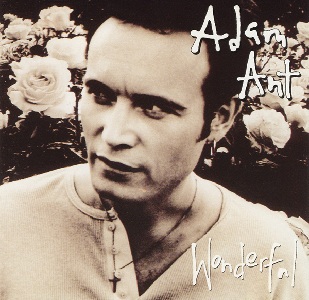 WON'T TAKE THAT TALK - Adam's fifth solo album had a more rockier and Acoustic feel.  This opening track is a guitar driven, moody Alternative Rock track that kicks off the album in style.  This was Adam, the serious rocker.

BEAUTIFUL DREAM - A quirky, almost fast spoken word Pop Rock track with a nice "pure" studio sound as all of this album. Engaging and cool with is sligt leaning to a Electronic Pop.  Its serious lyrics over a bright, almost humourous backing is an interesting mix.

WONDERFUL - Not many ballads in the Ant catlaogue but this is an absolute gem.  A beautiful song and Adam delivers it in his own style giving a heartfelt vocal. A great Rock Pop ballad by anyone's standards.  Prompting Adam to cry real tears in his video this is allegedly about his former girlfriend. Criminally ignored by the music media and only reached number 32 in the UK chart.

1969 AGAIN - New Wave Pop Rock with a laid back tone.  Hints of Americana and Folk.  Unusual.

IMAGE OF YOURSELF - One of my favourite tracks on the album, almost Tom Petty style, a kind of Americana mixed with Grunge Rock.  Really great song.

ALIEN - A rhythmic Punk/Alternative Rock hybrid with a hint of Funk and Rock N' Roll.  Another favourite of mine.  Again has that pure "live" sound of a jam.

GOTTA BE A SIN - The second single from the album and its a great catchy tune.  Its almost Glam Rock in style like T-Rex and The Sweet but with those guitar driven Classic Rock riffs.  Only reached number 45, ignored by the music buying public who were probably not ready for the Dandy Highwayman to mature into a rocker!

VAMPIRES - Another great track, almost Grunge like with dark Gothic overtones.  Some classy guitars though.  Atmospheric, moody and superb.

ANGEL - Reminds me of the big anthemic songs by U2 or Simple Minds.  A positive, upbeat chorus and its just not what you expect from Adam Ant.  A brilliant track and the album is worth checking out for this track alone!

VERY LONG RIDE - Reminds me of Madness, but its an "explicit" song, bascially it has one reference of the "f" word, but never mind.  Its quirky and rocky in a down played way.  Unusual end for the album but Adam never got where he did without experimenting.