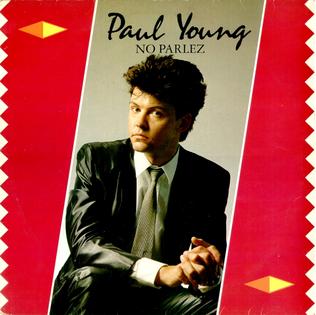 COME BACK AND STAY - A cover of Jack Lee’s 1981 song opens this debut album by one of the best voices in music.  This is a Soul track with an updated New Wave style.  This fourth single from the album reached number 4 in the UK chart following on the success of "Wherever I Lay My Hat (That's My Home)".

LOVE WILL TEAR US APART - A great, updated cover of Joy Division's 1980 classic.  The elements are still there from the original with Paul giving it a Soul update

WHEREVER I LAY MY HAT (THAT'S MY HOME) - The fantastic track that got me listening to Paul regularly.  Such a great vocals on this track. First recorded by Marvin Gaye in 1962 this rendition got Paul his first number 1 in the UK and set him on the way for a great 80s and long standing career.

NO PARLEZ - The title track is also akin to a Synth Pop track with medieval style chanting on the chorus which makes it even better.  Some great guitars and effects throughout.  Much better than the previous track and more memorable.

LOVE OF THE COMMON PEOPLE - Released in 1970 by one of the writers, John Hurley this cover became another big hit for Paul.  It charted second time round on its release in 1983 reaching number 2 in the UK chart.  A favourite of the 80s with its sing-a-long chorus.  An 80s Soul classic.

IRON OUT THE ROUGH SPOTS - Don Covay and the Goodtimers released this track in 1966 in an R n' B style.  Updated to be Pop Soul on this track.  Not one of my favourites but a good track.

BROKEN MAN - The B-side of "Wherever I Lay My Hat (That's My Home)" and a pure Soul ballad allowing Paul to stretch his awesome vocals a little more.  Really nice.

TENDER TRAP - An 80s straight Pop mid tempo ballad.  Typical 80s and it seems to me Paul is holding back his Soul voice a little.  This reminds me more of a later Wham or George Michael track.  Still a great track and the trombone parts are a unique touch.

SEX - An effects laden track which has elements of some other tracks on this album.  A little repetitive and a pretty disappointing end to such a great debut album.  It has some funky parts but on a whole fails to deliver.