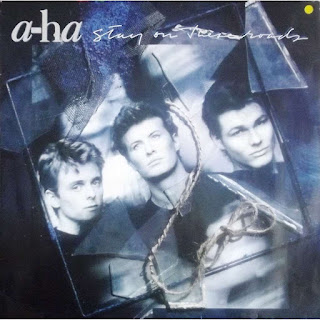 STAY ON THESE ROADS - Fabulous emotive title track reached number 5 in the UK chart and its Everly Brothers, early 60s feel was just brilliant, the A-ha sound had matured with every album and this was a more rockier album.

THE BLOOD THAT MOVES THE BODY -  This is one of my favourite A-ha songs and has a mysterious feel similar to a James Bond theme with a catchy chorus and orchestrated backing making it a little eerie sounding.

TOUCHY - This could have appeared on both previous albums, it is playful, summery and obviously catchy.

THIS ALONE IS LOVE - Ultimate Pop ballad, at times reminding me of Pop Rock like The Cars to the electronics of Yazoo.  Morten's vocals are stretched to all levels in this superb track.

HURRY HOME - So unusual, it has a faint hi-nrg beat, almost disco-like but also has funky beats and classic late 80s soft Pop Rock guitars with a singalong chorus.  Experimental but it works!
THE LIVING DAYLIGHTS - One of the great James Bond themes in my opinion.   Bond collaborator John Barry released his version as the single but A-ha reworked it for this album and by all accounts preferred their version to his! Class.

THERE'S NEVER A FOREVER THING -  Just a beautiful song, it lilts along with a minimal piano and drumbeat acoustic sound and Morten sings softly and quiet sometimes reaching that famous hgh pitched vocals to give the desired full emotional effect.  A gem of a song.

OUT OF BLUE COMES GREEN -  A-ha being soulful, a six minute epic track which reminds me of "Hunting High And Low" with its low and high vocals, complete with minor searing guitar and minimal keyboards, this is quite an awesome track.

YOU ARE THE ONE - Again another summery Pop single, similar to anything on previous A-ha albums, bright and breezy and minimal.

YOU'LL END UP CRYING -  Ends the album and is a kind of Latin sounding track, synchronised singing chorus and verses with trumpets and reminds me of Cowboys in Mexico for some reason!