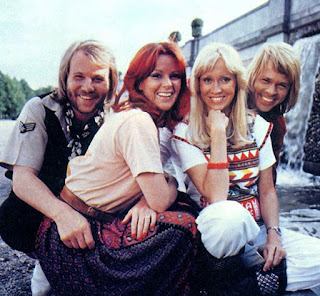 EAGLE - The album opens with one of my alltime favourite Abba songs.  Its mystical, space age, almost sci-fi musical backing and effects really got my mind engaged.  This is just a superb composition, and in headphones this whisks you away into the sky, free as a bird.  Almost 6 minutes of class.

TAKE A CHANCE ON ME - One of the band's most successful singles, a great sing-a-long memorable chorus and chug-a-chug style backing.  Europop Disco at its best.

ONE MAN, ONE WOMAN - Piano and synthesised led track with string parts make this a lovely ballad with Frida (Anni-Frid Lyngstad) on the leading vocals.

THE NAME OF THE GAME - Such a clever song, so many different sections in the song, even the vocals are jointly led by Frida and Agentha Faltskog with solo parts too.  There is a lot going on and is very complex if you listen closely.  Another hit single.

MOVE ON - This is a Waltz song that starts off like a Trucker song like "Teddy Bear" by Red Sovine in 1976.  Bjorn Ulvaeus starts the talking first verse then Agnetha takes over for the rest of the song.  A nice song but lacks the engaging quality of other songs, but to be fair, the best Abba songs are tough to beat.

HOLE IN YOUR SOUL - An Electronic Rock N' Roll song, catchy chorus and great beats and tempo.  This was a re-working of one of the tracks in the following "mini musical" originally called "Get On Your Carousel".

THANK YOU FOR THE MUSIC - This is the well known song that wasn't released as a single until 1983 to promote a Greatest Hits package.  A great song that fans were singing to Abba after they split. This mini musical was played on live tours.

I WONDER (Departure) - This is pure musical that wouldn't have been out of place in something like "Evita".  Frida takes lead vocal over a variety of orchestral instrumentation.

I'M A MARIONETTE - This is a Rock Opera type song.  Electronic Progressive Rock? Is there such a thing? this could be it!