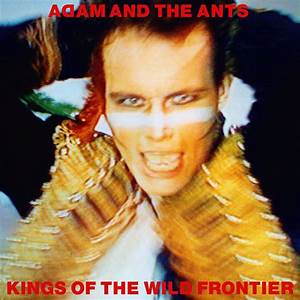 "KINGS OF THE WILD FRONTIER"

DOG EAT DOG - The pounding double drums opening, the pirate chants and a New Wave/Punk sound, the song that got me hooked on the band, storming start to the album.  The energetic Top of the Pops performance was an eye opener for my young self!

ANTMUSIC - The Ants' anthem, do yourself a favour and try another flavour as the song suggests.  An awesome single and sing-a-long chorus that just has "memorable" written all over it, as most of Adam's earlier work, ahead of its time.

FEED ME TO THE LIONS - A bit of Pop, Rock and Punk all in one package, top song.

ANTS INVASION - One of my favourite Ant tracks, its eerie Horror backing tells a story of an invasion, prophesying the band's few years' future domination of the charts perhaps?
KILLER IN THE HOME - Dark, but lyrically great song about Adam wanting to "free the warrior", maybe about when he needed to move on from early Punk and create something daring and new for others to follow.

KINGS OF THE WILD FRONTIER - A hit second time around and a pulsating wall of Punk brashness and pirate and triba imagery.  An absolute cracker!

THE MAGNIFICENT FIVE -  Another cowboy inspired song which asks the listener to "prick up your ears" and listen to these "five young hombres burning fire", and asking "which side of the fence are you on?".  Probably meaning to the Press if you are with this new Antmusic or against it.

DON'T BE SQUARE (BE THERE) -  "Antmusic for Sexpeople, Sexmusic for Antpeople, get off your knees and hear the insect prayer".  Join the revolution in music or be left behind.  Maybe also a nod to the old punks who said he sold out, but really he moved on and there was still elements of Punk in all Adam's music, he just adapted it.  There is also a nod to Dirk Bogarde, "dirk wears white sox", which just happened to be the debut album's title which was incidentally a new, polished version of Punk.

JOLLY ROGER -  Pirate shanty follows with its singalong chorus and whistling and warnings of Blackbeard and the pirates of old.  You could just imagine a crew of pirates singing this on deck with bottles of rum before setting sail.

MAKING HISTORY -  For me is the poorest on the album, it seemed rough and repetitive, not one of my favourites from Adam from all his albums in my collection.  Proper filler in my opinion

THE HUMAN BEINGS - This ends the album on a strange note. "Blackfoot, Pawnee, Cheyenne, Crow, Apache, Arapaho" Adam sings repeatedly in an Indian Warrior mode, full of chants and minimal backing.  It shouldn't work but it does, hardly any other lyrical content but the feel of the song really is uplifting and gives you a kind of proud feeling that you have joined the Antpeople tribe!