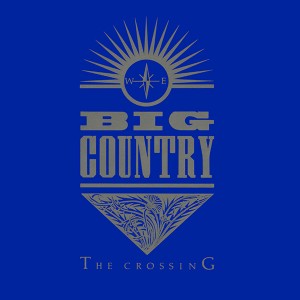 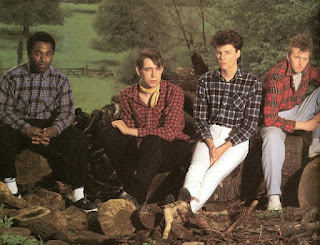 IN A BIG COUNTRY - The track became a massive hit in the U.S.A. as well as the UK.  As the opener to the album it was simply huge and a fantastic song.  Celtic drums, catchy chorus, chants, the classic Bagpipe guitars, simply a brilliant song and one of my alltime favourites by any artist.  Great singalong and one for the Air Guitar enthusiasts. Sheer class.

INWARDS -  This was more a Pop Rock song than the singles, with minimal normal Big Country traits, also parts of it reminded me of Medieval ambience. Atmospheric and engaging.

CHANCE - A ballad, and it was a gorgeous song, simple in its composition but incredibly emotive, no big booming crescendos just a light, lilting backing to Stuart Adamson's sensitive vocals.  Love this song.

1000 STARS -  Reminded me of U2 at the time for some parts but then the guitars kick in with that familiar pipe onslaught and it brings you back to where you belong.  A little more Instrumental than usual but its a nice song.

THE STORM - Beautiful song, some intricate musicianship here.  Amazing ambient sounds with some choral backing and harmonies amid a light chug-a-chug guitar and drum which at times features on its own to give a mysterious feel.  Again, my advice to you is listen to this album in headphones to get the full effect!
HARVEST HOME -  The debut single and a brilliant introduction to the band's sound, a pulsating almost Punk-like chanted spoken track with Scottish drum and bagpipes (guitars) abound, like a marching band rhythm

LOST PATROL -  Almost Goth Rock, minimal lyrics and the familiar atmospheric whirring backing akin to The Mission and The Cult who came later on the scene.

CLOSE ACTION - Hints at Progressive Rock with a little Folk thrown in for good measure.  A reasonably slow track but nonetheless excellent.

FIELDS OF FIRE - I remember listening to this in headphones and the guitar sounds were so pure and the Celtic Folk elements were heard in abundance.  More melodic than the debut single which was probably why it was a bigger hit, a great chorus and more atmospheric.

PORROHMAN -  A fitting end as it incorporates every sound and nuance of the previous 9 tracks.  For this track see above! Its epic coming in at almost 8 minutes long and sums up the whole amazing album by a great, original and unique band.