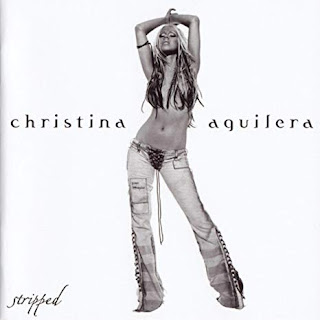 STRIPPED INTRO - Exactly what it says, its an intro.  A few effects, almost like radio searching and Christina vocals.

CAN'T HOLD US DOWN (Featuring Lil' Kim) - Funky Hip Hop with some R n' B thrown in for good measure.  It reached Number 6 in the UK charts and is considered by some quarters as a "feminist anthem".

WALK AWAY - Piano led ballad, emotional vocals from Christina singing about an abusive relationship, really nice laid back song with a message.

PRIMER AMOR INTERLUDE - 50 second Spanish interlude, a filler but not really sure why its here.

INFATUATION - Very similar style to "Genie In A Bottle".  Pop song but not as catchy as the aforementioned classic.  A kind of Flamenco style but not a great song for me.

LOVING ME 4 ME - Soulful sweet ballad, very 80s sounding.  It is nice and sultry.

IMPOSSIBLE (Featuring Alicia Keys) - R n' B Soul.  Would not be out of place on an Alicia album.  If you like this style this is for you.  Unfortunately it is not for me.  Its a little light on creativity.

BEAUTIFUL - Well, this is just a "beautiful" song, one of my favourites and is very emotional. It promotes a great message too.  It discusses inner beauty, and self esteem and feeling insecure about yourself.  Really lovely ballad.

MAKE OVER - Uses samples of Sugababes' hit, "Overload" and is a Rock/Dance fusion.  Great track.

CRUZ - Massive vocal range, a really lovely song. Its a  more poppy Soul track and sounds like early Whitney Houston or Mariah Carey on their first couple of albums before they started churning out the same old warbling stuff.

SOAR - This is a Rock ballad in similar vein to "Fighter".  With Gospel singing, hints of Soul and R n' B.  Another clever and cool song.

GET MINE, GET YOURS - Reminds me of Pink's first album before she started rocking out.  Its an "ok "song for me.  It just seems to pass me by.  Basic R n' B fare.

DIRRTY (Featuring Redman) - All about sexual interaction this track.  A great uptempo, funky R n' B with Redman adding his rap to make it appealing to the Hip Hop community.  Ironically, I like it until he starts talking.

I'M OK - This is an average ballad that goes on a little too long for me.  The lyrics sound heartfelt but it doesn't seem to give anything more than that.

KEEP ON SINGIN' MY SONG - Epic ending to the album at over 6 minutes long.  Lots of styles incorporate this track and Christina gives us her whole vocal range.  This pretty much is a sampler for the whole album.  Great end.