"WHEN THE WORLD KNOWS YOUR NAME" 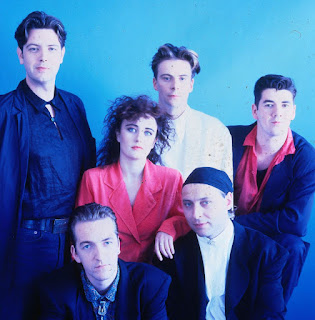 QUEEN OF THE NEW YEAR - Fast tempo Celtic Folk sound, starting with the drums in marching band mode and just building and building to this massive crescendo of a chorus.  A real foot stomper to open the album!

WAGES DAY -  This song kept up the pace from the opener with its uptempo beat all the way through the song and and would get your foot tapping and singing the catchy chorus as high and as loud as you can!

REAL GONE KID - The debut single from the album and was a more polished "live" band sound from the previous debut album's tracks from "Raintown".  It has a real Soul feel, which dives into a pulsating chorus and hit the senses as something memorable.

LOVE AND REGRET - A much slower track than previous 3 tracks.  It reminded me a little of Heart, it is essentially a Rock ballad, soft vocals from Ricky Ross and soft harmonies from Lorraine McIntosh make this a really lovely song.

CIRCUS LIGHTS - This has a great Rock twang and the chug-a-chug guitars are reminiscent of U2 and fellow Scottish rockers Simple Minds.  Cool track.

THIS CHANGING LIGHT - Another change in style, reminds me a little of The Jam and is a real Pop Rock track.  Proving that the band were no one trick ponies.

SAD LOVED GIRL - A short but beautiful piano led ballad with Ricky almost crooning his way through the track, really nice.
FERGUS SINGS THE BLUES - Ironically the title suggest Blues, but this a brilliant Motown Soul record mixed with some great Rock riffs, as with all Deacon Blue singles the melodies, the hooks are all here.

THE WORLD IS LIT BY LIGHTNING - Always reminds me of INXS "Need You Tonight" in style.  The Pop/Funk/Rock mix suits Ricky's voice perfectly.  Love this track.

SILHOUETTE - A kind of mishmash of Country, Folk and Pop. Great little song that has a quirky, delightful feel with some "woo hoo" shouts in for good measure.  Mid tempo track but a feel good song.

ONE HUNDRED THINGS - A more experimental track with echoed and electronig counding effects.  Almost Synth Pop of the early 80s, something like Nik Kershaw would release  This is no bad thing as I am a big fan of Nik, that crossover of Electronica and Pop is brilliant.

YOUR CONSTANT HEART - another track similar in vein to U2 and Simple Minds.  A soft Pop Rock track that runs along nicely but still has a powerful feel.

ORPHANS - An eerie end to such a positive and powerful album, an almost mythical and medieval type song, minimal backing and echo effects like it was sung in a hollow cave or cathedral.