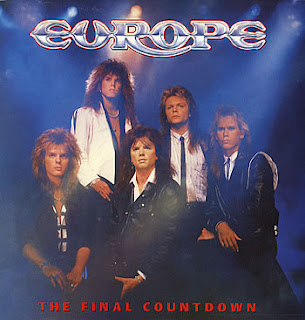 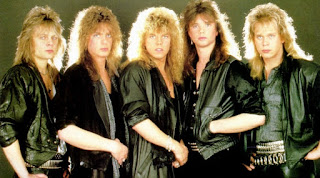 THE FINAL COUNTDOWN - The title track has been the last song on many a New Year's Eve night playlist.  Based around a simple keyboard riff it became a huge hit around the globe with Joey Tempest's powerful vocals and the virtuoso guitar strumming at around 5 minutes added to the song's legendary status.

ROCK THE NIGHT - This was re-worked and a more polished version from the previous "Wings of Tomorrow" album.  Classic 80s Rock sing-a-long akin with anything Bon Jovi had previously done a year earlier.  Top track.

DANGER ON THE TRACK - Great Pop/Rock crossover track coming complete with screeching guitar and a keyboard.

NINJA -  Sadly fails to deliver the high standards of this album, and is surely a filler here, its a little like the first album, a little bit too Rock standard with all the usual riffs and its pretty basic.
CHEROKEE -  Was released internationally as a single but not in the UK and it reminds me of The Cult a little and also for some reason "Since You been Gone" by Rainbow, love this track though.

TIME HAS COME -  Mix of fast tempo Rock streaming into an anthemic ballad with obligatory guitar solos abound with a simple but effective chorus.

HEART OF STONE - Typical 80s Rock, catchy chorus with the chug a chug of the guitar, mid song solo and light atmospheric keyboard backing.  Classic Rock at its best.

ON THE LOOSE -  Reminds me of early Heart and is easy going Pop Rock for the radio friendly listeners.  Its catchy and could have easily been a hit single.

LOVE CHASER - This has a tiny snippet intro similar to "The Final Countdown" which is a perfect ending to the album.  This final track is a slightly Fleetwood Mac/Heart influenced mid tempo song with catchy chorus and guitar solos.