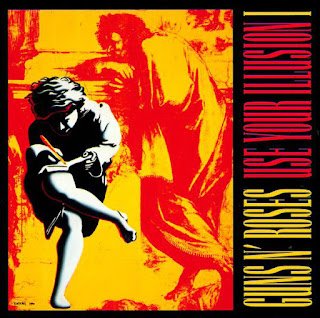 "USE YOUR ILLUSION I" 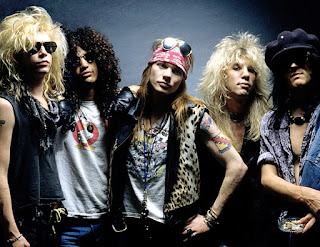 RIGHT NEXT DOOR TO HELL - A riotous Punk rocker, akin to Sex Pistols and The Damned etc, its raw speedy energy surely gave the pogo dancers a bit of a surprise!

DUST N' BONES - Mid tempo Blues Rock number that has a very slight Country tone but also midway through Axl Rose does his best horror snarl that reminds me of Ozzy, Alice Cooper and Marilyn Manson!

LIVE AND LET DIE - This cover of the Paul McCartney and Wings song blasts away the original in my opinion.  Just absoultely brilliant.
DON'T CRY - Lush original version of this Rock ballad which is similar in vein to "Patience", nice.

PERFECT CRIME - Reminds me of Iron Maiden, its manic and its two and a half minutes of energetic Rock with a hint of pure Metal.

YOU 'AIN'T THE FIRST -  A goodbye to a lover who obviously was not a favourite when you listen to the lyrics! Basically the girl was a temporary lover and not the first and also that she will be thought of while the guy is "deep down inside" with another lover, use your imagination for that line! Don't be fooled by the almost mono Country Folk bright, light and happy backing!

BACK OFF BITCH - Pure AC/DC soundalike, a real Heavy Rock masterblaster!
DOUBLE TALKIN' JIVE -  Similar to "You Could Be Mine" on "Use Your Illusion 2" from the Terminator 2 soundtrack.  Almost muffled singing and frenetic music backing with added movie like talking parts.  Very Progressive Rock type song.

THE GARDEN - Like a Horror movie backdrop, very Alice Cooper, (ideal as this features the great man) lots of deep snarling by Axl amidst searing guitars.

GARDEN OF EDEN  -  A crazy fast paced Punk Rock track which also incorporates some 70s style riffs and chants on the chorus.

DON'T DAMN ME -  Half classic GNR, half Iggy and The Stooges imitation, not one of my favourites, doesn't really work for me.

COMA -  A fitting last track that sums up the whole album as there are bits of everything in this 10 minute epic.  Some Bowie, some Alice Cooper, some T-rex and ending with AC/DC and Iron Maiden!  Their influences are seen in this track for all to see but the fact that they could intersperse these together is testimony to their songwriting and musical ability.