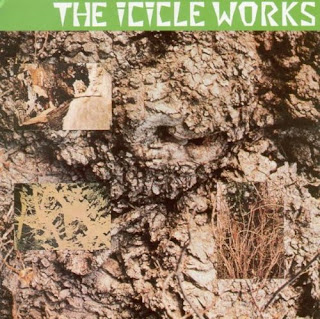 CHOP THE TREE - Opens the album with a fast tempo drumbeat with lots going on in the background.  Guitar chops, electronic whirrs and atmospheric leanings which actually give you the feeling of being in a forest.  A very emotive song again hidden in the uptempo music, clever composition.

LOVE IS A WONDERFUL COLOUR - From the start it had that anthemic, almost gothic, medieval sound.  The lyrics just sounded so intelligent and as a lyricist I just thought it was brilliantly written.  The song was so powerful with an emotive background that just sounded so uplifting.  One of my all time favourite songs.  I played this song on a loop for weeks!

REAPING THE RICHEST HARVEST - A kind of Gothic Rock love song.  This is almost like what The Mission would be doing in another five years time.  A beautiful emotional chorus that gives a good feeling inside.

AS THE DRAGONFLY FLIES - Has a funky beginning and then goes into Progressive Rock mode, with a Tears For Fears like chorus.  Searing guitars and stomping drums throughout.  Great song.

LOVERS DAY - A soft, gently sung Rock ballad.  It bangs into a massive Gothic Rock chorus and then comes back down.  Nice vocal harmonies help the ambience and it has a segment of sounds like a Rain Forest before bursting into the huge repeated chorus and ending.

IN THE CAULDRON OF LOVE -  Similar in style to "Birds Fly (Whisper To A Scream)", soft lyrics sung in storylike fashion before hitting an echo style big chorus.  Touch of class.

OUT OF SEASON - Reminds me of later Tears For Fears once again.  A big ballad with tons of emotion but sounding quite orchestral and also has moments where the backing is minimal.

A FACTORY IN THE DESERT -  Great Rock track, lots of elements of Classic Rock and Progressive Rock of the 60s and 70s.

BIRDS FLY (WHISPER TO A SCREAM) - The lovely guitar melodies and the chug-a-chug drums almost like Bow Wow Wow but this song had a fabulous ambience about it.  There seemed to be a lot going on but the effect was mesmerising.  Ian McNabb's vocals were perfectly delivered on solo moments and harmonious vocals backed him.  Such a great song with a catchy chorus.

NIRVANA -  Like a recap of what's included in the previous tracks.  It has everything The Icicle Works were about, searing guitars, vocal harmonies, slow teasing verses, big chorus, Gothic Rock, Classic Rock, Progressive Rock.  Superb ending to a fine album.