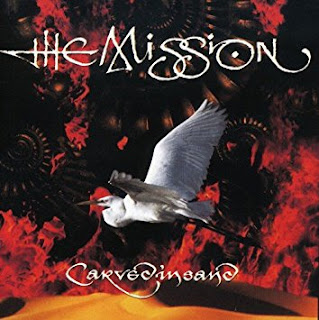 AMELIA - Opener to the album and is a great song albeit the subject matter is child abuse.  Superbly written lyrics about a Amelia being "daddy's favourite girl" and daddy telling her not to tell mummy about it.  Disturbing theme but brilliantly crafted to get the message across very bluntly.  Ends with the line "damn your daddy to hell".  Harsh lyrics but great song with a good message!

INTO THE BLUE - Similar to the songs on the debut album "God's Own Medicine", a stripped back mid tempo rocker making the most of Wayne Hussey's superb vocals and some Classic Rock guitars.

BUTTERFLY ON A WHEEL - A great lilting Rock ballad delivered in Wayne's haunting, passionate vocal.  Emotional and epic.  One of my favourites from the band and a big dingle for them.

SEA OF LOVE - Starts with a very Eastern influence and merges into a similar vein to that of previous hit "Wasteland" with some Psychedelic and Classic Rock moments.

DELIVERANCE - A Gothic Rock anthem that  delivers, no pun intended, the melodious medieval guitars The Mission are famous for, and a huge thumping rhythmic beat throughout.  The chorus is one of those you sing at the top of your voice letting out all that frustration and angst.
GRAPES OF WRATH - Beautiful soft ballad and I assume it is about the novel by John Steinbeck as it mentions certain elements of the book in the lyrics.  A really lovely chillout song.

BELIEF - Brilliant rocker with some Progressive Rock, some Classic Rock and Heavy Rock elements.  A 7 and a half minute epic Rock song.  Great stuff!

PARADISE (WILL SHINE LIKE THE MOON) -  An Acoustic uptempo almost Irish Folk style until just after 2 minutes it crashes into Iron Maiden territory with some real Heavy Metal leanings.

HUNGRY AS THE HUNTER - A little of a Punk Rock track with some Progressive Rock guitars thrown in for good measure.  Fast paced and bouncing all the way through! Superb track for the old Punks!

LOVELY - This track ends the album and is just under 2 minutes long.  Lots of atmospheric everyday life background noises while Wayne delivers some really nice lyrics with some Acoustics joining him.  Short and sweet end to a great album.