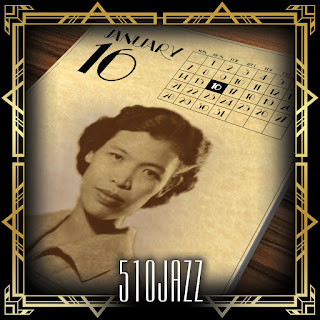 RIGHT NEXT TO ME (Featuring Matt Blaque/D-Varg) -  The album opens with a medium paced Samba crossover with a big summery vibe.  It is a fun, bright and breezy number with hints of Michael Jackson ("Off The Wall" era) and Gloria Estefan's Miami Sound Machine.  D-Varg's rapping gives it an updated appeal to younger listeners who may not have heard music like this before.

HE MADE IT ALL FOR YOU (Featuring Ricki Wegner) - A kind of Pop/Jazz feel to this track.  Its an easy going song and Ricki's vocals have that beautiful pure live sound of Norah Jones and also reminds me of the 80s band Matt Bianco in its style.  The minimal backing showcase the vocals brilliantly and make for a soothing chilled gem.

PLAY SOMETHING BLUE (Featurung Maya Victoria/D-Varg) - This is reminiscent for me of the Trip Hop downtempo fusion of 90s band Morcheeba.  Maya's breathy vocals imitating the band's lead singer Skye are perfect for this track and with D-Varg sounding like LL Cool J its a great track.  A chillout session to refresh the soul!

THE MOON AND YOU (Featuring John Vargas) - A serenading romantic ballad with all the attention on that special someone.  The faint Bossa backing with strings and horns more in control it reminds me of the Rat Pack guys like Sinatra, Martin and Davis Jr where its the lyrics and vocals that take centre stage.  If you dream of just you and your partner in an empty bar and the band serenades the words you want to say, this is the song for you!

DON'T TAKE YOUR LOVE AWAY ( Featuring Kristen Nicole/Nick Neira) - This tells the story of a long distance love affair and would be a great piece for a romantic musical where the two leads share their feelings towards each other alternately.  Simple composition but it is a lovely song, with Kristen and Nick singing it beautifully with great emotion.

FLY AWAY ( Featurung Nikki Rey) -  Another Pop/Jazz track, and again it fills the listener with a cool, relaxed summer sensation.  This time there is a Hawaiian element in the sound and you feel your head nodding to that Bossa beat and see yourself under a parasol drinking cocktails.  A really lovely song

STORMY WEATHER (Feauring Ricki Wegner/D-Varg) - A slow tempo R n' B/Soul crossover with the Hip Hop vibe once again ably given by D-Varg.  It reminds me of a couple of songs by Beyonce and her husband, Jay-Z.  A positive message that all will be ok however bad it sometimes feels.  The positive rap reminds me of Old School rap by originals Grandmaster Flash and Melle Mel not the angry rap that is more often heard today.

YOU'RE EVERYTHING TO ME (Featuring Maya Victoria) - Maya sings like a chanteuse in a local smoky bar here, with some lovely harmonies and doubled up vocals it sails along smoothly like a relaxing boat ride.  Silky Saxophone and sweet strings make this another soft ballad to relax to.

THE LONG WAY HOME (Featuring Mr Mego/Kristen Nicole) - An exploration driving trip on a relaxing Saturday is the backdrop to this track.  Again this would be another brilliant idea for a musical piece.  The lady and gentleman in question decide on taking "the long way home" as we all sometimes want to do, just to enjoy the scenery, drive at a leisurely pace and ignore the honking of the roadhogs in a rush! Beautifully sing once again and the backing music has a faint chug-a-chug feel of a moving car.  Very nice.

SAN JUAN ISLAND SUNSET (Featuring Oshra Sedan) - A real Latin influenced Jazz track.  Brings up images of sitting on a beach with not a care in the world, not only just brought up by the title of the track.  The horns and strings make this a happy little track that gives you a good feeling of wellbeing.

VIEWS FROM MY WINDOW (Featuring Matt Blaque/D-Varg) - A mass fusion of styles inorporating Hip Hop, Jazz and a little R n' B but still keeping that minimal Bossa drumbeat.  Experimental and in some ways reminds of me of some of Prince's mid 80s phase with orchestration, electronics and Jazz mixes.

THE ROCK OF LIGHT (Featuring Mr Mego) - A look into what it might have been like in Malaga when King Ferdinand was assaulted in 1487, a major battle in the reconquest of Spain from the Moorish Invaders.   With dark overtones such as this the song is obviously downtempo and with minimal flamenco-esque backing it reminds me of a Stevie Wonder positivity track.

SERENDIPITY (Featuring Oshra Sedan/Mr Mego) - A laid back track about leaving the everyday struggles behind and travelling the world.  Just like "Don't Take Your Love Away" and "The Long Way Home" this is a perfect song for a musical piece.  I wonder if the band would consider turning this album into a musical, with the right people it could be great!

LIFT IT UP TO GOD (Featuring Nik Nak/Ricki Wegner) - An upbeat Latin Jazz track that gives a positive message that no matter what is happening you are not alone.  The song has a great Soul and R n' B vibe that reminds me of classic late 60s/early 70s laid back Pop artists.

HORTENSIA (Featuring Nick Neira) - Minimal musical style track with some aspects of it being of a mystical style, with the flower in question (the official flower of Faial Island in the Azores) having a mysterious, soothing effect on the singer.  Experimental vocals including doubled up echoes and faint chants.  Unusual track!

JANUARY 16 (Featuring Rick Wagner/Matt Blaque) - The album ends with the title track, which is quite unusual from the albums I have reviewed thus far.  A tribute to a beloved mother and grandmother, Jesusa Estrada Cerezo.  Ironically the only track where the Bossa beat is almost hidden, this is the most Pop sounding and modern track on the album.  Could be easily placed within the 70s and 80s R n' B and Pop Soul of these eras' superstars.  Lovely end to an intriguing album.