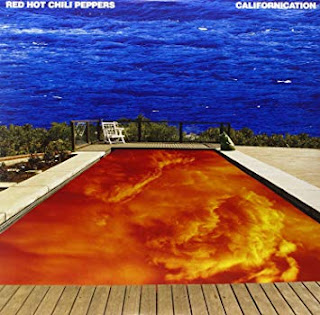 AROUND THE WORLD - A frenetic start to the album with the usual Rap Funk Rock as is the Chilis well known style.  With the searing guitar riffs, pumping percussion and Anthony Kiedis' variety of vocal styles this is the perfect beginning.

OTHERSIDE - A classy Alternative Rock track, almost Grunge style of the 90s.  This apparently deals with addicts' problems with their previous addictions.  A dark meaning but a great song.

GET ON TOP - Classic Chili Peppers simialr to "Give It Away", hard Funk Rock with Rap interludes and exquisite funky bass from Flea.

CALIFORNICATION - One of the band's best songs in my opinion.  Anthony shows his vocals have gone up a notch in quality from previous albums.  Almost Progressive Rock/Classic Rock crossover.  Absolutely love this song, driving backing music, great vocals and a memorable chorus.

EASILY - This track is pretty much like New Wave Punk from the late 70s, early 80s.  Has moments that remind me of The Clash and Elvis Costello.  A gem.

PORCELAIN - A dreamlike, emotive, almost lullaby track which is sweet and melancholic.

EMIT REMMUS - Punk meets Grunge in this track with some Classic Rock screeching guitars adding substance to the track.  A stomping track.

I LIKE DIRT - Reminds me of early 80s INXS, Funky Rock Pop at its best.

THIS VELVET GLOVE - Similar in style to "Scar Tissue" for the most part with some fleeting brash Rock parts.

SAVIOR - Superb Rock vocals from Anthony with intermittent 60s style harmonies thrown in.  This track is proof that Kiedis is not a one trick pony with the Rock Rap vocal, he really uses his range here.  A midtempo melancholic 70s Progressive Rock style song.