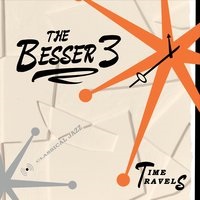 WHO'S COUNTING? - The opening track is a kind of march style song with full force.  Very dramatic and mysterious, clever off beat and off tune elements which reminds me of a soundtrack to a movie thriller.  A mix of light piano and heavier, angry chops and the Swing style slow, jagged tempo set us up for a rollercoaster ride of experiments to come.


KLEZMATIZED - Uptempo foot tapping track, sounds like a real Jazz jamming session.  Gives the feeling of happiness and fun and the funky bass gives this a real lift.  Really love this track, all musicians give the impression that this was a good time!


SWINGTIME OUT - Gentle, bass and piano in this real Swing Jazz chilled out track.  Minimal sounding but very casual and easy on the ears.  I can imagine being in an old style bar late at night with the band playing on stage in the cool, smokey air.


STEP FIVE - Romantic and emotive sounding track, again would be a superb backdrop for a black and white old style movie.  It has that old style quick and then slow electric piano parts that were synonymous with the films of a bygone age.


ONE TWO TREE - This is an unusual one, it somehow reminds me of a Ska/Jazz hybrid with the random off key harsh, angry piano chops.  Musically minimal but changes from mild upbeat to angry crescendo and then calms again.  Mysterious and experimental, described on the sleeve notes as a "herky-jerky walkdown in dissonant tones".  That sums it up perfectly!


SUSPENSION - The experiments keep on coming! This is almost like a Pop Blues and Jazz mix as screeching guitars work brilliantly with the light piano.  Also with the whirring sounds it sounds very alien-like and a little sci-fi.  This is close to Classical Jazz meeting Progressive Rock!


NO LAUGHING MATTER - Piano and light brushes on the drums for this track with minimal guitars.  It is a light ballad but also has some very dark moments at certain points.  The song builds to a big angry crescendo at around the one minute mark then cool's back down to a gentle finish.


AMBIENT SEVEN - Similar to the previous track with its minimal sound.  A nice, chilled track, steady on the ears with piano and brushes at the fore.  Has a very emotive feel and gives a really calm ambience that surrounds you as you listen.


DARK LOOP - Described as a "haunting journey", it is indeed like that.  An epic piano led track and at almost eight minutes long it has a lot of variations.  Starting off with a slow gentle piano it builds up to the middle of the song where the playing is more intense.  It meshes with the bass, guitar and drums for a little Funk sounding segment which if I was a little critical, could have been longer.  It is a nicely crafted song though, and it ebbs and flows throughout right until the end so you don't know what is coming!


THREE MONKS ELECTRIC - Saving the best to last in my opinion, I really love this track.  Funky bass leads the piano in a fun loving full on Funk Jazz jam.  Like the majority of this album the music is minimal but it still packs a punch and the songs are so well constructed they still make an impact.