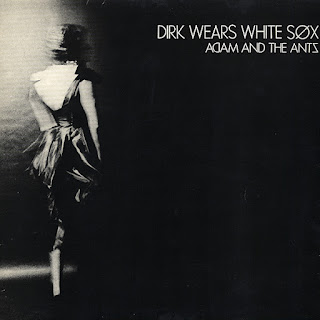 CATROUBLE (Parts 1 + 2) - The opening track is a mix of New Wave, raw Punk and arty Pop.  It is raw and with that great "as live" sound.  Part 1 is an experimental mish mash of sounds and effects, while Part 2 is a stripped back original demo style slant on the later, more brash and superior "Catrouble" single.

DIGITAL TENDERNESS - One of my favourite Ant tracks, New Wave Pop Punk at its best, similar to the style Blondie and the like were releasing.  Annoyingly catchy with the repetitive pumping drumbeat and guitar riffs its a gem.

THE DAY I MET GOD - Storming Pop Punk track about seemingly weird dreams when Adam met God.  Apparently it was "pissing with rain" and God had a big "knob", on his door of course and "streaks in his hair".  Slightly shocking to those who don't get the humour about religious ideals.

TABLETALK - A strangely appealing slow tempo Punk ballad.  Great hooks and catchy if repetitive chorus.  Another of my favourites, its simple, its eerie and its brilliant.

CLEOPATRA - Another bold and brash, provocative Punk style track.  Of course about the infamous seductress Cleopatra, no innuendos here, straight talking with lyrics such as "she did ten thousand in her lifetime, now that's a wide mouth".  I don't really need to go into detail what she loved doing!

CATHOLIC DAY - More hitting the nail on the head lyrics, "Kennedy dies with his brain on her knee poor Jackie..." Shock tactics from the original lineup's debut album? Surely not.  I love this song and felt guilty for liking it because it's quite seriousbut sung in a quirky, fun way!

NEVER TRUST A MAN (WITH EGG ON HIS FACE) - Another weird dream style track, this time about aliens on earth and their impact on a woman called Mrs B.  A steady eerie sci fi type backing to Adam telling this strange story with a low key chorus.  Great track.

FAMILY OF NOISE - Probably the most accomplished song on the album, its melodious Pop Rock, even adding a segment by The Beatles, "she loves you yeah yeah, she loves you and the Family of Noise".  Great track.

THE IDEA - The last track is a little uncomfortable, singing about handicapped kids and the like.  I am sure it's meant that we shouldn't be looking at people differently because of what they look like but its still a bit werid for me.  The New Wave style music is cool but maybe the lyrics weren't clear.