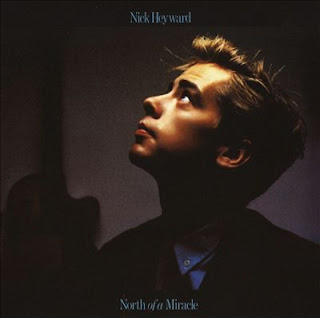 WHEN IT STARTED TO BEGIN - The opening track is an orchestral based, breezy Pop song, similar to Nick's former band Haircut 100 but more accomplished in style.

BLUE HAT FOR A BLUE DAY - One of my favourite 80s songs not just by Nick.  A minimal, melodious Pop ballad, with a memorable chorus and great lyrics proving Nick was a very underrated songwriter and possibly still is.  Lovely song.

TWO MAKE IT TRUE - A track with a slight Country twang interspersed with some bright jazzy Pop.  Another great tune.

WHISTLE DOWN THE WIND - A simply brilliant Pop ballad, its lush backing and the atsmospheric chorus make it a gem.  The song for me that proved that Nick could write intelligent and emotive songs.  Brilliant production and one of my alltime favourite 80s songs.

TAKE THAT SITUATION - This funky, jazzy Pop foot tapper is another gem from the Heyward catalogue.  The pulsating guitars and jazzy almost R n B backing works majestically with the lyrics.

THE KICK OF LOVE - Experimental Jazz Pop, has a little of everything and is more like a band jam.  Interesting if not at first listen, memorable like the other tracks here.

THE DAY IT RAINED FOREVER - An eerie, sombre, melancholic track with a minimal quiet backing allowing Nick to the fore exploring his vocals.  Sounds great in headphones.