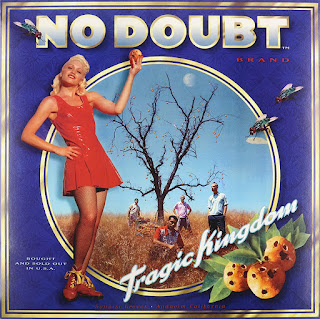 "TRAGIC KINGDOM"
1995
SPIDERWEBS - The opening track has the previous album's styles of Ska and Reggae but with a Classic Rock, almost Progressive Rock backdrop at some points.  Its a high tempo manic starter for what's to come!

HAPPY NOW? - A Pop Rock track that reminds me both of Blondie and Bangles, melodious and a catchy harmonised chorus, great tune.

DIFFERENT PEOPLE - A throwback to the previous albums, a quirky Ska/Reggae song with the minimal rocky sound in the background this time.  Takes you back to Selecter and The Specials times.

THE CLIMB - Gwen plays chanteuse and delivers a great sultry vocal amidst some Jazz backing with harmonies.  At 6 and a half minutes maybe a bit too long but its a lovely, laid back track.

SIXTEEN - Ska, Reggae and Punk merge to give a rip roaring uptempo gem.  One of my favourites.

SUNDAY MORNING - Reggae Rock at the fore here, possibly influenced by The Police's early style, its another gem from this, the band's third album.

DON'T SPEAK - The song that hit me like a ton of bricks, this was the one that got me hooked on Gwen and the boys.  Absolute class Pop Rock ballad.  A hit all over the world and very memorable.  Emotive and brilliant.

YOU CAN DO IT - A slight shift from the previous styles on this set.  This is pure 70s Funk Disco.  Awesome and proves the band can switch to any genre.

WORLD GO 'ROUND - No disputing what style this track is.  Pure Reggae Pop, a bright and breezy swirling summery sound backs up Gwen's vocals superbly.

END IT ON THIS - Little snippets of The Cars, The Police, Blondie and The Pretenders.  Great New Wave experimental track.

TRAGIC KINGDOM - The title track ends this fabulous album.  Its dramatic, almost cinematic Ska/Reggae backing also includes some great Rock guitars.  Pretty much sums up the album in one song, a little of everything by a great, inventive, unique band.