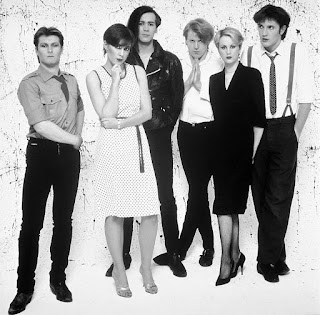 THE THINGS THAT DREAMS ARE MADE OF - This opening track is what Kraftwerk would sound like if they rocked up.  The musical backing is pure 70s Synth Pop with a strong powerful angst ridden vocal from Philip Oakey on the catchy chorus.

OPEN YOUR HEART - Great New Wave Synth Pop, a chirpy melodious backing track with a catchy chorus sung by Philip and backing singers Susan Ann Sulley and Joanne Catherall in unison.  Atmospheric and anthemic in content and a great track.

THE SOUND OF THE CROWD - The first single from this album and the the first commercial success for the band.  This always reminded me of early Gary Numan and also a little New Order.  Its like Gothic Synth Pop.  Eerie in places, powerful and its marching drumbeat keep the track pumping along.  Philip and the girls add various lyrics and chants to add to the mystery.

DARKNESS - A disappointment for me after the first three tracks.  Its basic meandering synths fail to grab me, the chorus is not that catchy and the vocals seem laboured.  Just my opinion but not one of my favourites.

DO OR DIE - This song has a kind of Latin Disco Pop backing track with repeated sombre and moody lyrics throughout its 5 minutes.  Its experimentation but it works, its quirkiness makes it a great song.  Unusual but cool New Wave.

GET CARTER - A Krafwerk inspired minute long instrumental, alien like notes repeated over.  A filler maybe?

I AM THE LAW - Another track that is a disappointment, this seems like a Gothic Rock attempt with Synths.  It drags along and is not a track that I would recommend.  The inventiveness of this third album seems to have run out a little with this one.

SECONDS - An easy going track, has some upbeat moments instrumentally, the lyrics are not great, the chorus is just ok.  Reminds me of Sisters of Mercy with the vocals, moody and repetitive but not enough to grab me, uninspiring in my view.

LOVE ACTION (DO YOU BELIEVE IN LOVE) - The band's first top ten UK single (reaching number 3) and its an 80s classic.  This was the track that I first heard The Human League on record.  Instantly likeable, catchy chorus, cheery synths and strong vocal from Philip, backed ably by the two girls.  One of my faves by the band and also of the 80s.

DON'T YOU WANT ME - The favourite track from the band at many parties and gatherings celebrating any time of year! A memorable slice of New Wave 80s Pop.  Catchy chorus and sharing lead vocals with Philip was Susan Ann for the first time (she and Joanne were only backing vocalists until this point).  Simpy a classic and loved by many as it claimed the Christmas number 1 in the UK in 1981.  A classic of the 1980s decade.