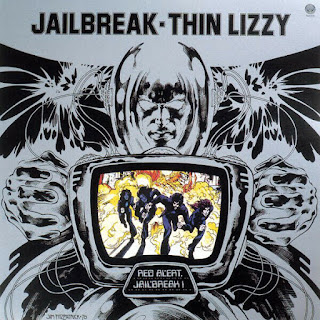 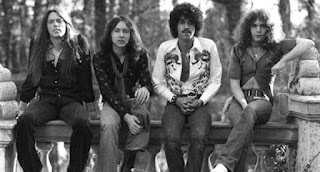 JAILBREAK - The opening track is a mid tempo rocker with an almost funky drumbeat, screeching guitar solos in the backing track and a scorching insrtumental break after the 2 minute mark complete with "jailbeak" sirens.  A memorable chorus completes a classic Thin Lizzy track.

ANGEL FROM THE COAST - A chug-a-chug guitar picking and drumbeat , almost Celtic style, similar to the usual backing Iron Maiden took on later on in the 80s.  Uptempo 70s Rock track that simmers along nicely, not one of my favourites but the backing music sure gets you tapping your feet.

RUNNING BACK - A really nice, laid back song, almost Blues Rock with a slight Pop element.

ROMEO AND THE LONELY GIRL - I really like this song, its a little cheesy in the lyric, "poor romeo sitting all on his owni-io"!  Other than that its a nice song with the usual great guitar moments.

THE BOYS ARE BACK IN TOWN - One of my favourites and a classic Thin Lizzy track.  Pure Classic Rock, a fabulous catchy chorus and some awesome guitar moments that was synonymous with this band.  Sheer class.

FIGHT OR FALL - A melancholic, mellow song with a slight Americana and Country feel.  Phil sing an emotive vocal and its very minimal mostly Acoustic backing is perfection.  The guitars are a gentle mix of Country Rock and Folk.

COWBOY SONG - Beginning as a kind of Western rodeo song, that merges into a stomping rocker.  The triple guitar threat comes into full effect and seams effortlessly into a Blues Rock number.  Absolute stormer of a track with a hint of experimental genius.

EMERALD - A fitting end to the album, an Irish tinged hearty rocker.  The only song on the album credited to all four members.  It certainly has that element of a pure, full on Rock jam fest.  Loads of screeching guitar solos, a fabulous non stop drumbeat and it is an absoulte gem.  Sums up the whole album in one track!