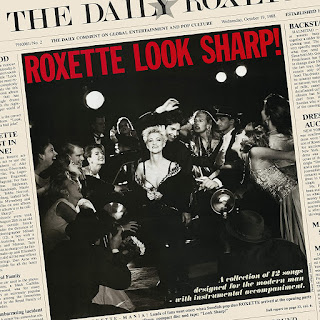 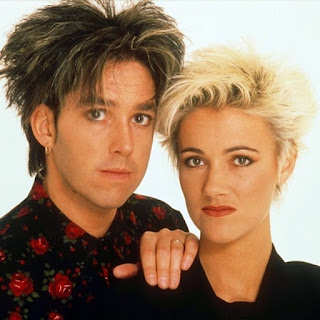 THE LOOK - The opening track of the album and the first big international hit for Per Gessle and Marie Fredriksson.  It was also the first song that got me hooked into Roxette's brand of music with the irresistibly catchy melodies and chrouses.  This was a slice of Swedish brilliance, with Per taking on lead vocals on a funky Pop Rock tune that sticks in the memory.  Sheer class.
DRESSED FOR SUCCESS - A slightly slower and less funky, typically 80s New Wave Pop.  Marie takes lead vocals and her extraordinary range carries this to new heights.  A booming chorus from her steals the show and makes this a grower, if not in the class of "The Look".
SLEEPING SINGLE - Almost Electro Pop track, with snippets of saxophone and funky guitar with Marie singlehandedly carrying a lesser track to an engaging, higher momentum.  Its cool and laid back, good but not a masterpiece.
PAINT - Love this track, a little Disco Pop merged with 80s New Romantic styles.  both Per and Marie have starring roles in this tune.  Nice, melodious chorus, one of my favourites, and maybe a contender for a single that never was.
DANCE AWAY - Great Pop track with hints of Electronica and Rock.  A memorable chorus once again and a cool sing along track.
CRY - Simply beautiful and soulful Rock Pop.  Marie mastered the art of big, emotional ballads and this is no exception.  An absolute gem.
CHANCES - A Pop Rocker with a pumping electrobeat and catchy chorus as usual.  Another favourite of mine, classic Roxette.  Add some searing guitar solos and this is a storming track.
DANGEROUS - Similar in vein to the opening track, "The Look".  All the classic Roxette elements are there.  It became the band's fifth and final single off the album that could have had more hits.  Simple but effective Pop Rock with hints of Dance Pop make this a radio plus.
HALF A WOMAN, HALF A SHADOW - An anthemic Rock ballad in the vein of Heart.  Brilliant song with harmonies that could have been found on any Bangles album.  Cool!
VIEW FROM A HILL - A dance orientated styled Pop song,  Not for me this one, it is the first dud I encountered on this album.  It meanders along with nothing to really grab me by the ears.  Run of the mill Euro Pop.
(I COULD NEVER) GIVE YOU UP - A nice enough song but not one of my favourites, it lacks the punch of previous tracks.  There is a nice tiny Acoustic guitar part and the chorus is pleasant enough but its a disappointment.  Maybe this album is so full of good stuff that this just hides behind them.
SHADOW OF A DOUBT - An atmospheric mid tempo Pop Rocker.  With its experimental feel, the vocals are good, the musical parts are sometimes classic, sometimes off, something about this one doesn't grab me.  I have heard it many times and still it lacks a little something. Sounds more like a Movie scene soundtrack.
LISTEN TO YOUR HEART - This track was not a hit first time around but after being released following another classic Rock ballad "It Must Have Been Love" soared to new heights.  Has since become a staple on various love related albums and mixtapes along with the aforementioned "It Must...".  Showcases what an amazing voice Marie really had and what a loss she is to the music industry.  Fantastic.
album artist indie marie fredriksson music per gessle pop roxette