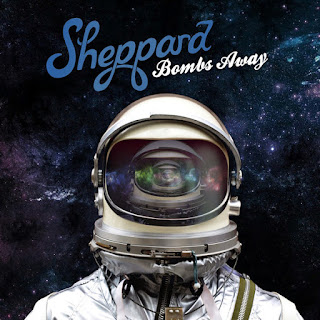 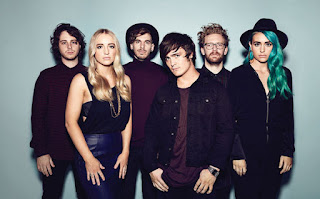 GERONIMO - The album opener and this is the song that caught my attention to this great Australian Indie sibling band.  The driving, almost marching band drumbeat keeps the pace throughout while the fabulous harmonies from George and Amy Sheppard and melodies bring this storming song to life.  The chanted chorus that sticks in your head instantly makes you incapable of not singing along with it! Catchy, powerful, inspiring and uplifting.  An absolute gem.
SOMETHING'S MISSING - Slowing down a little after the opening track.  This is a more melancholic track, Acoustic sounding as it builds up pace as the song progresses.  Beautifully composed and produced, its a little Country and a little Folk Rock.  Reminds me a little of The Corrs in some moments, brilliant.
LET ME DOWN EASY - A chirpy kind of 50s and 60s Rock N' Roll Pop.  The song grabs you with a fabulous rhythm that will make you nod your head, click your fingers or tap your toes.  Irresistible and memorable.  Its a very smooth composition and instantly likeable.
THESE PEOPLE - A mid tempo late 60s/early 70s style Pop Rock track.  Almost sounding like Simon and Garfunkel or The Everly Brothers in style, beautiful harmonies again and chanted backing vocals.  Very nice.
A GRADE PLAYA - A more Electronic sounding Dream Pop track with modern R n' B layers..  Lovely female lead vocals from Amy.  It brings to mind Gwen Stefani at times but the chorus is reminiscent to the new style of R n' B such as Pixie Lott and Jessie J.  A big, pure voice makes this song fantastic.
SMILE - Another Amy vocal lead and this is a quirky, gorgeous Summery Pop ballad.  Has an almost Reggae/Ska feel and is incredibly engaging.  For a debut album this is such accomplished material and this song is a treat.
THE BEST IS YET TO COME - A positive and inspiring song sung by a seemingly tortured George.  Almost musical soundtrack in places but undeniably an atmospheric Pop ballad.  Uplifting and powerful yet also gentle and emotional.
THIS ELECTRIC FEELING - This reminds me of The Specials, it has that almost dour but brilliant backing of Ska and Reggae.  Also it has thet eeriness and darkness that backs up Amy's vocal brilliantly.
FIND SOMEONE - This track is a Jazz Swing style which suprisingly builds into Grunge Pop similar to Fall Out Boy to finish! Experimental genius, proves that this family band are not afraid to switch styles at any time.  Love this, unusual and cool.
LINGERING - Another gorgeous Pop ballad with the dual vocals and harmonies of George and Amy which lifts the track to another level.  Sweet, emotional and ultimately fabulous.  Still no fillers on this great debut!
HALFWAY TO HELL - This is a fantastic ending to the album.  Has that pumping drive that the opening track, "Geronimo" led us to.  Amy's vocal is tough, brash and big, reminding me of some of Adele's tracks.  The Native Indian chants work brilliantly with the Rock Pop vocal and driving Western style rhythms.  This is basically this whole album in one song, a little of everything.  Absolutely brilliant.
album artist indie music pop sheppard