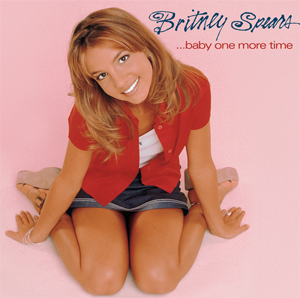 ...BABY ONE MORE TIME - The breakthrough song for Britney opens this hits laden debut album.  It was a new style Pop at the time, a kind of robotic sounding stop-start with an infectious melody and chorus.  Britney led the way for a new kind of female Pop.  This was undoubtedly helped by the "sexy schoolgirl" video that instantly made all the males of the world sit up and take note.  Girls wanted to be her and boys wanted to date her.  New kid on the block makes good a song that TLC could have recorded.

(YOU DRIVE ME) CRAZY - Another Pop gem with a hint of rockin' guitar in the background.  Its punchy and quirky and has a big beat, much like the boy bands in the early 90s when they wanted to sound big and tough and not bubblegum Pop.

SOMETIMES - A favourite of mine because it shows the insecurity and little girl emotions hidden behind the tough, brazen, bubbly and confident sound of the previous singles.  This was her second single and another hit.  Its strikingly different, its a slow Pop ballad, full of melancholia and heartache.  Nice.

SODA POP - This funky Pop track has hints of Rock N' Roll and Reggae.  It bounces along merrily, and clearly is a fun track.  Doesn't pack a punch like the first three tracks but its a cool song if just for the summery vibe.

BORN TO MAKE YOU HAPPY - Another Pop ballad, a typical ealry 90s ballad with some 80s influence.  Always reminds me of Christina Aguilera's "Genie In A Bottle", very similar sounds.  This actuall isn't one of my favourites even though is was another UK number 1.  It seems quite repetitive and not as catchy.

FROM THE BOTTOM OF MY BROKEN HEART - Almost Motown Pop Soul here although Britney is not "soul diva" by any means she conveys the emotional value of this track to good effect.  Its a nice song but again not a top track for me.

I WILL BE THERE - A Pop Rock backing track lifts this track from an average song to a really good one.  Its in similar vein to "...Baby One More Time" and could have easily been a hit single.

I WILL STILL LOVE YOU (With Don Philip) - An average Soul/R n' B ballad.  It just fails to lift off but the vocals are nice and melodic and merge ok but its sound is not as big as it could be.

DEEP IN MY HEART - An upbeat Pop Disco track, with some Madonna infuences.  Its got a great beat and rhythm and its simple but a typical 90s Dance track.

THINKIN' BOUT YOU - Again there is a little Madonna influence here, it is a steady Dance Pop track with funky leanings and a repetitive chorus.  It grows on you after a few listens, its quirky and fun, we forget that this is teenage girl who made this album so a little simplistic exuberance is taken.

E-MAIL MY HEART - Easy, laid back Pop for this track.  It meanders along with a slow pace and fails to leap off the ground.  The track is the usual Pop fare we hear regularly now and has become quite dull.  There's hardly any change in substance to make it more appealing.

THE BEAT GOES ON - This Electro Pop cover version of Sonny & Cher's 1967 track is actually a slow burner. On first listen you wonder what the hell is going on and what has she done to the original classic? Then it actually grows on you and even though it sounds like lazy vocals from Britney it actually works.  Its quite unique and its become a weird favourite of mine!