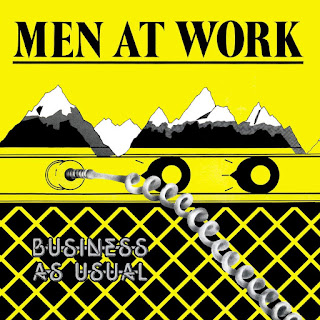 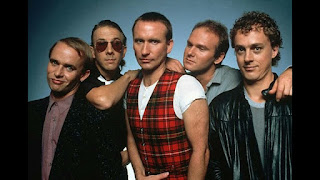 WHO CAN IT BE NOW? - The debut single opens this first album by the Australian New Wave band.  Elements of Ska and Pop combine in this bouncy track, ironically about paranoia and seclusion! The saxophone by Greg Ham and singer Colin Hay's vocal interplay are masterful and ingenious.  Great track and should have been a bigger hit in the UK.

I CAN SEE IT IN YOUR EYES - A typical New Wave Pop Rock song akin to the The Cars and The Police.  Some delightful guitar keeps this engaging.

DOWN UNDER - The massive global hit, a number 1 in the UK and the USA and many other countries.  The quirky Reggae style and comical lyrical content plus the hilarious video made this a favourite on MTV.  An absolute classic 80s track and the most famous by the band.

UNDERGROUND - Another New Wave Pop Rock track that unlike "I Can See It In Your Eyes" doesn't need saving by guitar.  A great composition all round and brilliant track.

HELPLESS AUTOMATON - Greg Ham takes lead vocals for this track, reminds me of Devo with hints of Synth Rock and New Wave Pop.  Another gem.

PEOPLE JUST LOVE TO PLAY WITH WORDS - A quirky little Pop song, very 80s style.  Its a nice song if failing to live up to the other great songs on this album.

BE GOOD JOHNNY - This is allegedly an homage to Chuck Berry's song "Johnny B.Goode" with a clever word play on the title.  It reminds me in some parts of the Synth Rock akin to Yes and Rush.  It also has some dance style Rock N' Roll and Reggae influences as well making it light and upbeat.

CATCH A STAR - A Ska based track that is generally ok but again fails to live up to the standards of the album.  It is nice enough but just doesn't grab me.

DOWN BY THE SEA - An epic atmospheric experimental Rock track coming in at almost 7 minutes ends a great debut album.  Every member of the band contributes with the obligatory echoed vocals, sweet guitar sound and superb saxophone.  A nice laid back finish!