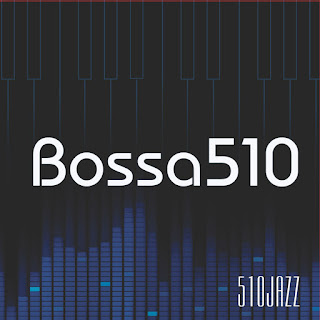 BOSSA510 - The debut album from John Vargas' all star multi-talented ensemble kicks off with a funky bass and guitar intro which moves into Jazz Funk seamlessly incorporating some 90s style Hip Hop.  David Vargas (known as D-Varg and John's son) provides the cool, summery rapping while R n' b star Jamillions provides some chilled vocals.  It would almost be the perfect Pop song but the twist of Randy Merril's flugelhorn makes it just that little bit more unique.

COME WITH ME - A delightful Latin Jazz style track that again infuses Rap and the Bossa style.  A lot slower pace than the previous track with some beautiful Soul vocals from Nikki Rey fronting a lisght, laid back backing.  D-Varg again provides the Rap sections while Nikki harmonises in support.  A really nice chilled song.  Actually reminds me a little of LL Cool J tracks from the late 80s.

OCEAN BREEZE - Feeling like you are chilling out on a beach taking in the cool breeze in Summer.  The superb Jazz horns from Randy Merril (flugelhorn) and Esther Berndt (sazophone) carry the feeling and emotion throughout the song with sophisticated crooning vocals from Jamillions.

STRANGER IN BRAZIL - The first composition written by John Vargas after being convinced by his son David to write.  A quirky and light track with a hint of Funk and sounding like a summertime jam.  The song is about a guy travelling to Rio De Janeiro and searching for this mysterious girl he fell in love with.  Bystanders and passers by just see him as the Stranger In Brazil.  Percussion and horns mesh with one another to provide a sweet backing for John Vargas' vocals.

RAINY DAY IN BORACAY - Jamillions takes the vocal role again on this deceptively upbeat, but eerie track.  The moody "rain" soaked backing makes it unusually a little sad and also positive. Mark Rickey's synths give it an extra boost giving off a stormy backdrop.

NIGHT ON REDFISH LAKE - Vocal duties turn to John Vargas as he takes on the role of a smoky bar room crooner.  This piano led, emotional and almost strange backing gives off the feeling of quiet wonderment.  It apparently evokes memories of John and his son Andrew seeing the stars being reflected on a lake.  This laid back Jazz ballad is a nice, relaxing trip.

SUMMER TAKE ME AWAY - Vocalist Oshra Sedan leads this fusion track that is a little R n' B, a little Motown and a little Jazz.  Its a delightfully chirpy, upbeat song despite it being provoked by feelings of sadness after a vacation has ended.  This track is supposed to encapsulate that feeling of excitement and positivity of a coming vacation and how quickly it should come, I imagine!

ATLANTIS LOST - A smooth, typical Jazz track that is a tribute to John Vargas; grandfather, Antonio Francisco Vargas.  Jamillions takes on the vocals in this poignant story of everyone missing their "Atlantis", the place they had to leave to find themselves or find something better for their families or their future.

SUNDOWN IN PACIFICA - An upbeat Latin Jazz track vocalised by Nikki Rey once again.  Reminds me of Gloria Estefan and Miami Sound Machine in style.  Its slightly funky, latin dance backing give it an uplifting feel.

CAFE IN LEBLON - A chirpy, slightly Pop style Jazz track with some cool vocals from John Vargas. I love the flute and piano in this track.  The song was inspired by Brazil's legendary songwriting duo Antonio Carlos Jobim and Vinicius De Moraes.  They wrote the song "The Girl From Ipanema".  The song reflects on how it could have been in 1962 to write the leading Bossa Nova anthem.

FOUNTAINS OF YOUTH - Vocals by Jamillions and backing vocals by John Vargas on this Jazz ballad.  The hint of Latin percussion is here and the horn and piano lead the song to the usual smooth Jazz heights.

THE BAY TRAIL - Nikki Rey leads the song that is a nice fusion of 60s style Bossa and almost sounding like gentle, summery Trip Hop reminding me a little of Morcheeba. The percussion seemingly sounds a little off beat at times, not a continual beat which cleverly adds to the track's ambience.

HIGHWAY 1 - A lovely, light Acoustic ballad led by Tony Song's beautiful classical guitar.  Inspired by the amazing California coast highway, Highway 1.  Jamillions' vocals are emotional, heartfelt and uplifting.  Close your eyes and relax to this one.

DAY IS DONE - An epic classic Jazz break up song finishes this debut album with 5 and a half minutes of stunning, sultry, emotion from Nikki Rey's vocals.  Esther Berndt's saxophone enhances the feeling of the track.  A fascinating first album which can delight both Bossa fans and other genres' listeners.