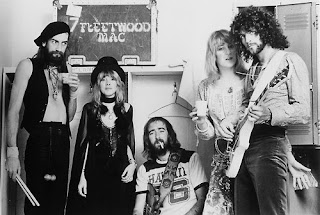 SECOND HAND NEWS - The opening track of the album is a bouncy, quirky Folk style Rock song, reminds me of the 60s duetted sounds of The Everly Brothers and Simon and Garfunkel.  Sung by Lindsey Bucking ham who was also the composer.  Great melody and harmonies and a neat guitar solo to finish which could have been longer but a great song.

DREAMS - The second single from the album reached number 24 in the UK chart and is one of my favourite "Mac" tracks.  It was covered brilliantly by another favourite band of mine, The Corrs as well. This lilting Soft Rock ballad is beautifully sung by Stevie Nicks and is a notable classic.

NEVER GOING BACK AGAIN - This song is a merging of Country Pop and Folk Rock with some stunning pure Acoustic guitar and vocals from writer Buckingham.  Really lovely song.  Was a B-side for a handful of singles in various countries.

DON'T STOP - This track criminally only reached number 32 in the UK chart.  A brilliant track, Pop Rock at its finest with a steady Blues rhythm and great vocals led by Christine McVie and Buckingham.  One of my favourites and a real gem and sing-a-long track.

GO YOUR OWN WAY - A classic Rock song as well as classic "Mac".  Buckingham leads the vocals ably by the ladies Nicks and McVie.  The first single from the album and again, incredibly only reaching number 38 in the UK chart.  Magnificent.

SONGBIRD - A really beauiful piano and Acoustic guitar track.  McVie takes the vocals as well as the piano parts while Buckingham provides the Acoustic backing. It is Soft Rock but also has a slight Pop and Jazz feel.  Nice.

THE CHAIN - The only track on the album where the songwriting credits go to all five members of the band.  A largely instrumental song with few lyrics but it has an engaging feel.  The faster segment around the 3 minute mark was used as the theme tune for Formula 1 coverage.  It is almsot Country or Folk Rock for half the song then it gets more and more rocky finishing with the drums getting faster and the searing guitar riffs.

YOU MAKE LOVING FUN - Reaching number 45 in the UK chart this is a really great song.  It is one of those songs that you only realise you have heard it before when the chorus comes in.  A really nice Folk Rock ballad feel to most of the song with almost funky Blues interludes.  Sung and written by McVie this should have been a bigger hit here as with most of their singles.

I DON'T WANT TO KNOW - Nicks and Buckingham share vocals on this track.  A quirky little Folk, Blues and Country Pop mix.  This is a jaunty number complete with hand claps and a sing along melodious lyric.

OH DADDY - Written and sung by McVie and its a lilting Blues style ballad.  Emotional and laid back, not as engaging as most of the tracks on this album and definitely not a favourite of mine, but it is ok.

GOLD DUST WOMAN - Writtena nd sung by Nicks and its a moody, melancholic track.  It is almost Progressive Rock in style with some Country Blues twang.  I love Stevie Nicks' voice so I really like this anyway.  Great track to finish an almost perfect album!