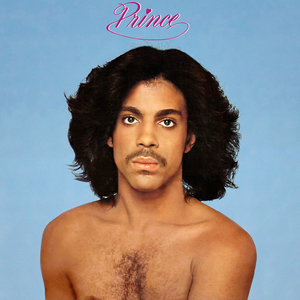 I WANNA BE YOUR LOVER - The opening track to Prince's second album was his first big hit in the USA reaching number 11 in the Billboard Hot 100 and also was his first single in the UK chart although only reaching number 41. It is a falsetto vocal all through backed by a funky almost Disco sound.  At about 2 minutes 40 the Synth Pop Disco style takes us to the end of the 5 minutes plus tune.  The first big notice that Prince was coming.

WHY YOU WANNA TREAT ME SO BAD? - A New Wave Funk Rock track, with hints of Rock N' Roll with the guitars and bass and easy drumbeat.  Sung in high pitch once again but well worth a listen for the awesome guitar solo for the last minute or so, introducing us to the sublime talent.

SEXY DANCER - A genre popping track, not so complicated lyric wise, with lots of grunts, sighs and soft vocals with an occasional scream.  Funky as hell, and because of the "orgasmic" breathy sighs was treated as risque here in the UK, clearly not ready for the upcoming Prince phenomenon just yet.  It is New Wave, Synth Rock, Disco and Funk all rolled into one.  Simple but engaging.

WHEN WE'RE DANCING CLOSE AND SLOW - The first real emotive ballad on the album.  The line "I want to come inside of you" may be risque but that's Prince.  Sex is love and faith in equal measures.  Still it is a lovely, light, gentle and sweet song.

WITH YOU - Another emotional ballad with Motown Soul leanings, I hear its not a favourite with some Prince listeners but I like it.  It has emotion and feeling and Prince's falsetto vocals give it a great emphasis.  The final "...with you" at the end is heart wrenching.

BAMBI - A big Rock workout with a little Funk.  Heavy on the guitars with some Glam Rock hints to the likes of Marc Bolan and T-Rex in the middle of the song.   Awesome guitar riffs abound.  Class.

STILL WAITING - A Jazzy, Rhythm and Blues track with some soulful vocals.  It is bright and breezy but in a quirky soft tone.  It is a nice, laid back tune although not one of Prince's best.

I FEEL FOR YOU - The original version of the classic Chaka Khan hit that everyone knows.  This is a funky Disco version with hints to R n' B and of course does not feature Melle Mel's rap.  Its still a cool track but most people heard Chaka's version first so feel fit to compare both with this a less flattering rating.  The synths and guitars blended together makes this a great track either way.

IT'S GONNA BE LONELY - The best ballad on the album comes to end the set.  It has a little of everything, synths, deep bass and guitars and a repetitive drumbeat.  The falsetto vocals work best on the big Gospel-like chorus.  Great end to the album, one of my favourite early Prince tracks.