"A LEAP OF FAITH" 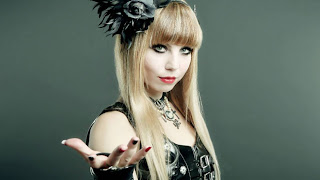 THE ROAD SO FAR - This second album by the band kicks off with a beautiful, gentle Asian styled melodic and relaxing orchestral piece lasting just over 2 minutes.

ASTERO(ID) - Atmospheric, big, loud Metal track with Sophia carrying the melody with the vocal.  Its brash arena style sound and frenetic rhythmic tempo are paired with some screeching guitar riffs.  Another gem.

LISTEN - Sounding like a more metallic Avril Lavigne and hints of Amy Lee of Evanescence this is a straight up Rock track.  Its pace is relentless but if you listen in the headphones you can all the layers behind the pounding beat.

A LEAP OF FAITH - This track is like a merging of Pop Rock, New Wave and Classic Rock.  One minute it is Alanis Morissette, then Blondie then Heart.  Love this, an instant favourite, lovely vocals again from Sophia.  It is like a mid tempo Rock ballad, great stuff.

HOW THE STORY ENDS - Another gem, Heavy Rock intertwined with enough Pop Rock to satisfy all listeners.  A mid tempo heavy beat with more mighty harmonic vocals from Sophia.  The style of Avril Lavigne, Amy Studt and Meredith Brooks spring to mind.

ALMOST HUMAN - Another pacey Metal track, with an eerie, mysterious element.  Anthemic Rock with more Electronics heard in the foreground, there is almost Synth Pop mini segment combined with searing guitar solos just to change it up a bit!

WHAT A TIME TO BE ALIVE - The closest thing to Synth Rock, lots of electronic sounds and guitars and drums merging together to make a massive wall of sound.

YOU ARE NOT YOUR PAIN - A soft break from the crazy pace of the album with this 1 and a half minute lilting piano piece.

LISTEN (TO THIS) (FATAL FE REMIX) - A more beat orientated and electronic sounding remix that is actually cool.  It is effects laden as is the usual club mixes etc. but it is a little different as it still incorporates the Heavy Rock beat of the original.

A PLACE TO CALL HOME (JAPANESE VERSION) - Basically a Japanese sung version with a few English lyrics.  It's still great but obviously I prefer the English version as I am English.  An accomplished album ends following the success of 2014's debut, "The Human Paradox".