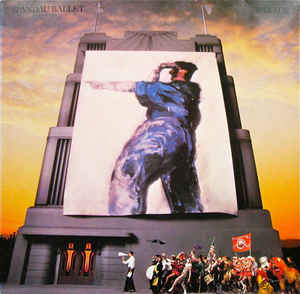 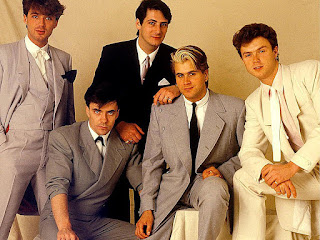 ONLY WHEN YOU LEAVE - The first single from the album and reaching number 3 in the UK chart making it their 8th Top Ten single.  At the peak of their powers after the global success of "True" this was a slick, smooth piece of New Wave Soul.  Tony Hadley's voice again carries the song to new heights. Catchy chorus and one of my favourite Spandau tracks, beautifully crafted and a class song.

HIGHLY STRUNG - More rocky than previous tracks with the prominent guitars, also has a hint of Funk.  New Wave Pop and again an irresistible chorus that you can't help but sing along to.  Another classic Spandau track.  Only reached number 15 on the UK chart as the album's third single.

I'LL FLY FOR YOU - Possibly my favourite Spandau track.  Love the saxophone on this, akin to "True" in powerful emotion.  I just like the feel of this track, its light, emotive and pure.  Tony holds back a bit  here but its really nice and then kicks it up a notch on the big chorus.  The second single in the UK reaching number 9.  Brilliant song, New Wave Pop at its best.

NATURE OF THE BEAST - Unfortunately every Spandau album throws in a duff track and this is it this time.  An unremarkable Pop track that fails to deliver for me.

REVENGE FOR LOVE - Melodious Pop Soul with a little Funk.  Not as good as the first three tracks and only a touch better than "Nature Of The Beast".  Only a good chorus saves this one.

ALWAYS IN THE BACK OF MY MIND - A mid tempo, light Pop Rock track with a hint of Folk and Blues elements in the keyboards.  Great saxophone again by  Steve Norman.  Lyrically not the best but a good song.

WITH THE PRIDE - One of the stand out non-singles on the album along with the final track.  One of my favourite tracks by the band.  Could have been a single I think.  An easy song to sing along to with a great mix of keyboards, drums, guitar and saxophone.  Both of these final two tracks eliminate the disappointment of the previous two and end the album on a high.  This is a great track.

ROUND AND ROUND - One of my all time favourite tracks by Spandau Ballet.  It is beautifully sung by Tony giving us full on emotion.  It is sad and uplifting in equal amounts.  Pop Soul in full effect. Fabulous track with a great chorus and lyrically on a par with the 80s classics.  Love this, except for a couple of tracks this is a worthwhile successor to "True".