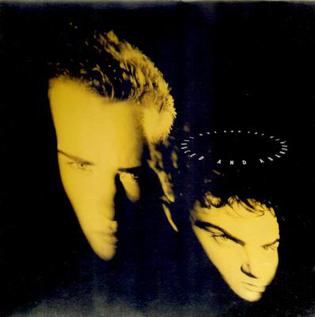 STRENGTH TO STRENGTH - The band's debut album, considered to be "sophisti-pop" saved my music listening pleasures along with fellow Scottish counterparts, Deacon Blue, Texas, The Proclaimers and Del Amitri.  Amidst the onrush of Acid House and boybands etc this was bliss.  This opening track criminally was ignored after the success of "Labour of Love".  It is an unusual orchestral Pop Rock track with old style crooning vocals.  Great harmonies and melodies.

HISTORY CITY - This track is a mix of Jazz Blues with a little Funk and some awesome vocals from Pat Kane backed ably by his brother Greg on various keyboards.  Its punchy and bright and you can't help but move your feet!

GOODBYE TO ME - A pure Pop Soul track with a Country twang.  The band have a great ear for lush melodies and this is no exception.  The lyrics are sometimes highbrow but the sound id incredibly engaging.

HUMAN TOUCH - A gentle Jazz styled ballad with some emotive and swing vocals from Pat.  A really nice song.

LABOUR OF LOVE - The band's biggest hit to date reaching number 6 in the UK chart.  A throbbing rhythm and fast paced vocals supported by great lyrical composition.  The catchy chorus and memorable tune stuck in my mind for weeks after I heard this.  A top song and one of my favourites from the supposedly little known bands of the late 80s.

I REFUSE - This track was released again after the success of the album and reached 47 on the UK chart after previously only hitting 85 as their debut from this track.  More Jazz Funk induced Pop which is superb lyrically and an awesome chorus.  Another top track criminally ignored like the band itself.

SOMETHING WARMER - A funky Soul number with twinkly guitars and punchy brass.  Great Acoustic section in the middle of the song followed by a piano solo.  Great stuff.

LOVE IS THE MASTER - A minimal mid tempo foot tapping Jazz Funk sung with aplomb by Pat that carries the song to another level.  This song is one that could have flopped but for the strength of the vocals.

JUST ONE WORD - A really cool Jazz Pop ballad with a little Funk.  The composition sounds so simple but there is a lot going on and its really well crafted if you listen closely.  The lyrics and music intertwine effortlessy but cleverly.

TRUTH - A nice paino and orchestrated slow ballad but it doesn't end the album on a high note.  This was such a great, upbeat, inspiring album but this last track just fails to deliver.  Even the previous slower songs had some punch.  Disappointing end to a predominantly great debut.