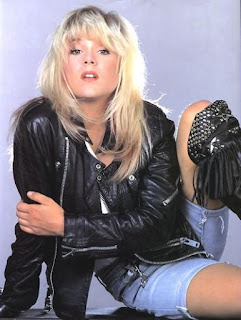 TOUCH ME (I WANT YOUR BODY) - Sometimes making a huge switch in careers can be troublesome.  Samantha Fox started as a 16 year old glamour model and became the most sought after pin-up girl in the 80s.  However in 1986 she turned to music and released this great Pop album.  Opening with this massive debut hit, number 3 in the UK chart its a great slice of Synth and Dance Pop with hints of Rock.  Catchy, saucy, sexy and memorable.

I'M ALL YOU NEED - The fourth and final single from this album only reached number 41 in the UK chart.  This is a really nice, quirky Synth Pop track epitomising the early to mid 80s Electronic music boom.  Catchy chorus and some lovely vocals from Samantha.

SUZIE, DON'T LEAVE ME WITH YOUR BOYFRIEND - A kind of Motown/ R n' B simple track.  Doesn't really go anywhere to be too engaging on the ear.  Not one of my favourites and definitely a filler here.

WILDA KIND OF LOVE - The intro shouts of "Wild" sound a little like Duran Duran's "The Wild Boys".  This is a kind of Punk styled New Wave track, a little like Cyndi Lauper's first album.  Catchy song.

HOLD ON TIGHT - A bouncy 50s Rock N' Roll track complete with whoop vocals from Samantha.  This is a cool, upbeat, bopping number.  Stray Cats and Shakin' Stevens may give you an idea what this sounds like! This third single only reached number 26 in the UK chart, disappointing after the Top 10 successes of the title track and "Do Ya Do Ya (Wanna Please Me)"

DO YA DO YA (WANNA PLEASE ME) - Mentioned above this second single reachd number 10 in the UK chart.  A great New Wave Pop Rock with a booming chorus and some screeching guitars backed by a pumping beat.  Brilliant track and one of my favourites from the 80s.

BABY I'M LOST FOR WORDS - A really nice Pop ballad with a mid tempo backing.  Softer vocals from Samantha, its a mix of Synth Pop and New Wave effects.  Sing along chorus, its simple and may be a little cheesy but its a great Pop song.

IT'S ONLY LOVE - A 60s style track that could appear in an 80s film mimicking that era with the obligatory saxophone segment.  Not enough musically to keep my attention, even the "ooh oohs" all over it don't lift it up!

HE'S GOT SEX - A pumping rhythm drives this track laden with electronic effects and screeching gutiars which could be louder for me.  The Pop Rock chorus is great and sung with aplomb from Samantha but the verses lack a little lyrically.  Co-written by Michael J. Mullins, lead singer with 80s band Modern Romance.  The pulsating beat and the chorus save this one.

DROP ME A LINE - Solely written by Mullins this time and this album closer is a quirky, fun Pop song.  A merging of the "Hold On Tight" 50s style and Pop Rock guitars later on.  A fine debut from Miss Fox.