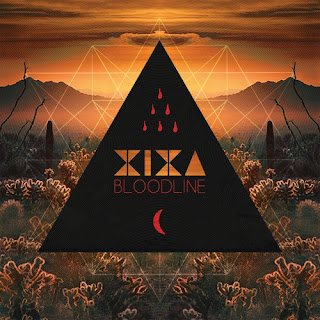 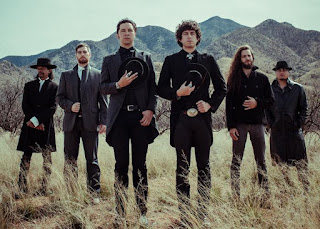 BLOODLINE - The opening track to this debut album by the band from Tucson, Arizona is a taster for the rest of the album.  A merging of many genres but keeping with the Latin influences and "desert rock". It is almost Gothic Rock and Punk in places with a hint of Nick Cave and Iggy Pop.  The eerie effects and twangy guitars add the Blues style and New Wave connections.  This is Rock but not as you know it, awesome.

VAMPIRO - The frenetic almost Rockabilly guitars back up a moody, desperate vocal.  It reminds me at times of BowWowWow but without Annabella Lwin's angry vocals.  Love how it incorporates the Latin and cowboy western style rhythms.  Experimental at its best and has a strange Punk danceability

KILLER - This track is the most Pop styled track so far.  Its calypso and almost ska feel is usually linked to Cumbia Rock which the band have infused into their unique music.  Its quirky and endearing melody and mid tempo backing intertwine greatly with the vocals that border on 70s Marc Bolan and 80s Adam Ant at times.

WORLD GOES AWAY - A more laid back, melancholic track sounding like a merge of African Blues and Latino rhythms making it a very unusual track. Sadam Iyad (of the band Tinariwen) features on this song.

DOWN FROM THE SKY - This is a great track, a n incredible mix of exotic Eastern sounds with the Latino base style.  It is just like late 60s/early 70s Progressive Rock with a twist! Brilliant.

PRESSURE OF MANKIND - An intro which sounds like a manic movie chase scene then turns into a little Grunge before giving a fuller sound to the intro with more power.  It then becomes a quirky Rock styled New Wave 80s Punk. Yes it is that hard to explain! XIXA love to experiment and will never be pigeonholed into one genre or style!

GOLDEN APPARITION - Kicking off with Industrial sounds before heading into a Reggae Blues merged with Latin guitars,  It ends with some of the Progressive Eastern sounds akin to "Down From The Sky".  Great track.

DEAD MAN - A really lovely song, with a real pure sound, great heartfelt vocals over a miniaml backing.  It reminds me of a Simon and Garfunkel song when they experimented with a Folk Rock kind of feel with extra effects and sounds.

NENA LINDA - Loosely translated (I think) as "Cute Baby"  this track is a traditional Latino mid tempo ballad.  Its cool and takes XIXA away from the experimental Rock and back to their main influence.

LIVING ON THE LINE - This final track is an epic 10 minutes long and incorporates pretty much every style and genre that preceded before on this album.  The added twist is that this has a more political slant as Donald Trump became President and wanted to build a wall between North America and Mexico.  A brilliant debut album and proof that for this band there are no limits in musical terms.