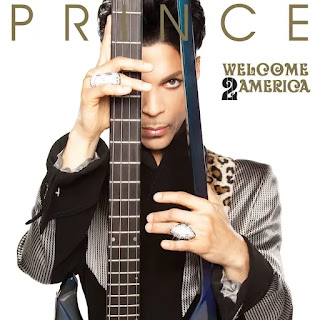 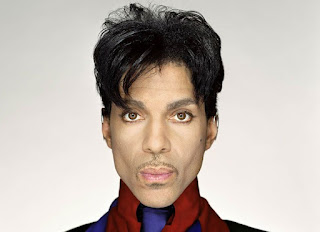 WELCOME 2 AMERICA - The title track starts with an eerie, sparse soundtrack before giving glimpses of a little funkiness.  Prince's sarcastic social commentary is backed by female harmonised vocals.  It reminds me of the "Lovesexy" album in its creation.  its funky, quirky and has some electronic noises interspersed with guitar and bass licks.  Cool opener.
RUNNING GAME (SON OF A SLAVE MASTER) - A light funky jazz number even though the lyrical content is slightly dark in composition.  It rolls along nicely and is laid back but I guess the content is more important than the quality of the opener.
BORN 2 DIE - Prince's famous falsetto vocals emerge in this track.  another slice of light funk with an irresistible simple catchy chorus.  Again the song is light but the lyrics are not so, seemingly talking about a "bad girl" which could be a prostitute and/or a drug taker/seller.  Great track nonetheless.
1000 LIGHT YEARS FROM HERE - A light Pop/R n' B track, with a hint of Jazz.  Prince again backed brilliantly by the "three ladies", Shelby J, Elisa Fiorillo and Liv Warfield.  Its a jaunty little number that will give you a lift.
HOT SUMMER - A more upbeat, Pop track reminding me of a Roxette track.  Its funky and has a great ongoing beat with some great harmonies by the ladies and another simple catchy singalong chorus.  Prince kicks it up with some searing guitar midway into the track.  This is one of those Prince tracks that seems simple but seems still ahead of its time.
STAND UP AND B STRONG - Elisa joins Prince on this first verse at the lead mic.  Its a really beauitful and melancholic song.  This for me is on a par with some of Prince's greatest ballads such as "Sometimes It Snows In April" and "Still Would Stand All Time".  Brilliant and one track that tells you how much this guy is missed in music.  Uplifting and sad in large amounts with a positive message.
CHECK THE RECORD -  The tempo rises in this cool rocker.  Its dirty, kick-ass beat and searing guitar licks pump up the volume on the album.  Also some trademark Prince piercing screams for good measure.  Awesome track.
SAME PAGE, DIFFERENT BOOK - Similar in vein to the title track, that Electronic Funk style of "Lovesexy" tracks and various voices linking.  Another gem.
WHEN SHE COMES - Prince's famous (some would say infamous!) sexy lyrical content arrive on this album.  This is exactly what you think, no innuendos here.  Its a great slice of sexy, naughty romanticism in the style of "Do Me, Baby" and the like.  Non-fans hate this sort of stuff but us Prince fans love it!
1010 (RIN TIN TIN) - A Jazz-Funk composition with mentions to the aforementioned Rin Tin Tin, The Lone Ranger, Beethoven  and Bach.  Add to this eclectic name check with nods to Social Media, earthquakes and genetics.  Yes its that weird but its still good! As with most of Prince's work, even the mad and bad is still better than most other artists' best work!
YES - Prince is encouraging us to say "YES" if we want a better future.  Its uptempo Funk Rock reminding me a little of the "Batman" soundtrack in its composition.  Under 3 minutes of glorious fun(k).
ONE DAY WE WILL ALL B FREE - The final track on this album is a little bit of everything we have just heard, a summary of "Welcome 2 America" if you like.  A nice little easy going singalong chorus adds to this nice ending.