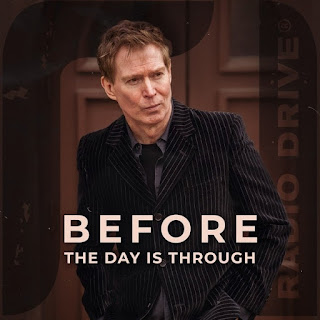 "BEFORE THE DAY IS THROUGH"

IT'S WHO I AM - A bright and breezy opening track, a kind of Country Blues/Rock hybrid.  It reminds me a little of Tom Petty.  Great little guitar solo at 2 minutes in.  It's got a great beat medium paced beat to it and has a catchy chorus.  Great start to the set.

IN THE NOW - A slight drop in pace for this one, a little Indie Pop Rock with some well placed peaceful sounding "ooh oohs" for good measure. It has leanings towards New Wave with possible hints to bands like The Cars.

GIVING THE BEST - This track ups the tempo and power with an Indie Rock sound with hints of 60s Psychedelia.  This makes me think of The Police in the late 80s and to a lesser extent, Yes.  It has such a great "live" pure sound this one.

NO TIME TO STAY - Kevin Gullickson has this knack of changing the genres all over the place which is refreshing.  Radio Drive is not a one trick pony! This is a brilliant track consisting of some Indie, 90s Grunge and also a little Madchester hinting to The Stone Roses.  Love this one.

WHAT YOU KNOW - A melancholy Pop Rock track with some lovely Acoustic guitar parts.  Its a calming, moody track with a positive vibe despite the slow pace of the track.  Great song.

LET MY LOVE BE THE PROOF - Atmospheric Rock ballad, super sweet vocals from Kevin and a big, brash, steady, orchestrated style backdrop.  Arena Rock at its best.  This is a storming track.

THANK YOU - This is a brilliant track, another Rock ballad like the previous track but this time sounding a ittle more Psychedelic 60s style.  Think The Beatles with the quirkiness of The Monkees added to Guns N' Roses at their balladic best.  Such a nice listen and another gem.

THE OTHER SIDE - A slow, moody beat and equally sombre orchestrated accompaniment.  It is almost Eastern sounding and the passionate vocals from Kevin unite the composition.  Another track that sounds positive with the melancholic backing track.  A catchy little chorus too.

YOU HELD ME - This track also reminds me of Yes with its big Electronic Rock sound. The slow pace lifts as we go through the song and it does remind me of the 80s quite a lot.  Kevin really flexes his vocals in this song and it shows how talented this guy is.

IN MY DREAMS TONIGHT - The final original track of the album is a beautiful little piano led ballad.  Emotional vocals from Kevin front the delightful backing making this a really lovely listen to end a fine album once again.

LET MY LOVE BE THE PROOF (Reprise)/YOU HELD ME (Reprise)/IN MY DREAMS TONIGHT (Reprise) - Even more stripped back versions of these three tracks giving an extra dimension and alternative listen.