ADAM AND THE ANTS 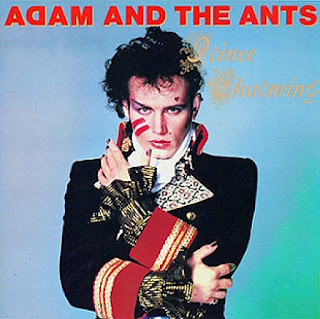 SCORPIOS - This album was apparently "rushed out" for the record company as Adam Ant has said many times although it still boasts some great points.  Some fans hate it but I don't get that.  This opening track served as a great link between the warrior sound of "Kings Of The Wild Frontier" and the more mature polished sound of Adam's solo album, "Friend Or Foe".  This is catchy, punchy and although a more orchestrated sound is a killer track to start.

PICASSO VISITA EL PLANETA DE LOS SIMIOS - Another great song in my opinion, its catchy with Adam's wailing like warrior vocals still to the fore and the quirk,  lyrical cleverness that we associate with his songs.  The warrior chant is here and again is a subtle link between the second and fourth albums.

PRINCE CHARMING - The classic and memorable track from this album along with "Stand And Deliver".  I remember eagerly awaiting this video, getting up early one morning before school just to see it. It just instantly grew on me and the video is brilliantly done. The screaming intro, the guitar strums and the chants, a little repetitive in parts but who cares! With Adam it is the whole thing, hear the song and see the video in your head.  Of course the chorus was instantly learnt to a tee, being a big fan it had to be!

5 GUNS WEST - This is a throwback to the previous album with its spaghetti western feel like "Los Rancheros".  Country Cowboy styled guitars with Americanised vocals.  Big, brash and bouncy. Always loved this track.

THAT VOODOO! - This track almost has late 60s style backing before turning into some Psychedelic mode.  Then it turns into a hazy Country Blues twang while the chorus is repeated until the end.  I must admit I always loved singing this end segment over and over.  Experimental song but I really like it.

STAND AND DELIVER - Everybody knows this one.  Another classic 80s track in general.  The driving drumbeat and classy guitar, the "da diddley qua qua" sound.  It is just the perfect 80s Pop song.  It was one of the most unique tracks of the 80s and sounded like nobody else.  Add to that the fantastic storybook video, undoubtedly the stand out track here.  This album version has a different ending which is more abrupt with a defiant "ya" to close.

MILE HIGH CLUB - Never was one of my favourites this one, this actually does sound like a rush job and possibly the biggest negative on the album along with the next track which we will get to.  It just meanders along with no real purpose and no catchiness like the previous tracks.

ANT RAP - Bare bones version of the track, totally bereft of the power and production of the single version which I really love.  It just sounds like a demo and a practice, I have heard some Ant demos and the B-sides obviously are all still above par, this sadly fails to hit me. Disappointing.

MOWHOK - Another one fans seem to have a love/hate relationship with.  I think its like the first two tracks of the album, still has the "warrior" vein and this time focuses on the Native Americans rather than the Cowboys.  A catchy chorus, not fantastic lyrically with lots of whoops and wails and chants but has a good beat.

S.E.X. - Some don't like this track either but I love it.  Adam sings it really well and it comes out as a sexy and romantic song.  The light guitar backs his vocals up beautifully and I think its a great song.  The song finishes with a minute's worth of light, sunny hawaiian music apparently called "The Lost Hawaiians".  Not a bad album, but Ant fans to me, seemed to want the same album every time.  I loved the fact that Adam changed the sound and look with every album, keeps you guessing and shows his versatility.