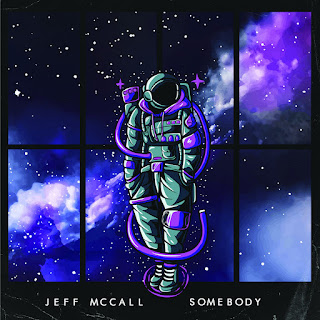 SOMEBODY - Jeff's third album starts off with an intro straight out of Kraftwerk's copybook before a more moody Industrial sound kicks in.  The chorus changes to a more melodious Pop sound akin to of Erasure before returning to the Depeche Mode style Synth Rock.  Jeff has this 80s retro sound licked and this is another catchy gem.

I SEE YOU - A little more uptempo this one, straight out Synth Pop reminiscing the sound of The Human League.  This could easily have fit on the classic album, "Dare" from 1981.  It also reminds me a little of A Flock Of Seagulls in its minimal, simple catchy beat and lyrics.  Nice.

NO TIME TO DIE - A more Europop Synth style on this track.  If anyone recalls Berlin's 2nd album, "Pleasure Victim" (way before the 4th album that gave us "Take Your Breath Away") this is similar to that great infectious almost disco beat with a memorable chorus.

TWILIGHT ZONE - Possiby my favourite from this album, very Soft Cell-like from the early 80s..  Upbeat track with a slight link to late 80s in the middle of the song as it changes to a little instrumental part that takes me back to Madonna's early years.  Majorly catchy tune!

RICK RACK - A likeable, minimal Synth ballad, doesn't get your attention with the lyrical content as much as the rest of this album.  Probably my least favourite track here but its still a nice, relaxing composition.  Its still has some emotional value like the original by The Humblebums from 1969, featuring Gerry Rafferty and Billy Connolly along with Tam Harvey

FALLEN ANGEL - An almost Gothic Synth Pop sound here, although it reminds me of Heaven 17.  Very cleverly done, I always like when there is a slight uptempo beat and yet the vocal arrangement is much slower.  It is eerie and moody but a great song.

PART OF THE CON - Brilliant track, interspersing Power Pop, Synth Pop and Rock.  It is moody, melancholic, yet giving off a positive, atmospheric and emotive vibe.  My second favourite track here.

YOUR EYES - Depeche Mode/Kraftwerk hybrid with a sparkling vocal from Jeff lifting it from downbeat to upbeat in a second.  Classic Synth Pop.

GOODBYE EUROPA - Awesome tune, uplifting with a steady beat.  This kind of reminds me of early Duran Duran.  A classy piece of Synth Pop/Rock.  Great vocals and atmospheric backing give this tons of emotional value.  Pure class.  Another fabulous tune from Mr McCall.