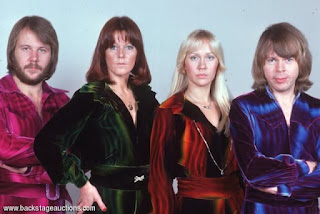 WHEN I KISSED THE TEACHER - The opening track to the fourth album from Abba is a lighthearted whimsical light Pop Rock track about a student who can't handle the crush anymore more and kisses the teacher! If anyone else made this track it would be scandalous but this seemed to have gone by the censors.  It is a breezy track to open a great album.

DANCING QUEEN - Every party staple since this was released.  An all time classic, number 1 in the UK and numerous other countries and even their only USA chart topper.  Unmistakeable intro, catchy chorus and a pumping Europop Disco beat with slower vocals, a gem.

MY LOVE, MY LIFE - A simply beautiful ballad, sung by Agnetha.  Such pure vocals and a melancholic melody that is both positive and heartbreaking.

DUM DUM DIDDLE - By any other artist this would be a ridiculous, banal Eurovision entry.  The fact that is sounds pretty decent despite that is such a testimony to Abba that they can make anything sound music worthy!

KNOWING ME, KNOWING YOU - Another classic rolls off the line on this album.  The third single from this set and reached number 1 in the UK and its another of those magical memory inducing songs. Sung this time on lead by Frida.

MONEY, MONEY, MONEY - The big hits kept coming for Abba with this great Europop Rock styled track.  Again with Frida on vocals, it sounds almost like a James Bond theme with its dramatic orchestral-like backing.  Only reaching number 3 in the UK chart but a massive hit all over.

THAT'S ME - This track would not be out of place on the "Voulez-Vous" album with its pumping Disco beat.  Although deep into the next decade Erasure would come around, this surely would have been one of their blueprints.  Electronic Synth Pop Abba style.

WHY DID IT HAVE TO BE ME? - 60s slow Rock 'n Roll track here with Bjorn joining the girls for the vocals.  It has a great Jazz Blues feel too.  Cool.

TIGER - An uptempo Pop Rock track that wouldn't have been out of place in the early 80s.  It is almost New Wave Disco.

ARRIVAL - To finish the album, the band go for another instrumental offering, I actually like this one.  It has a nice  Gothic Folk feel in composition.