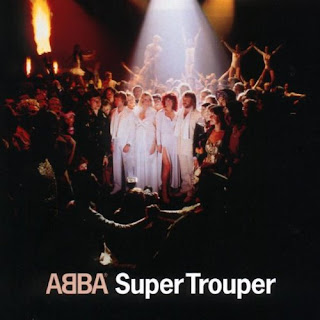 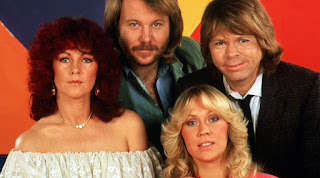 SUPER TROUPER - The UK number 1 title track opens the band's seventh studio album.  "Super Trouper" returned the band to their inimitable catchy Pop Rock style after the Disco sounding "Voulez-Vous".  Although this was not the last album before the break up, this seemed a fitting end and was their last good album in my opinion.  "The Visitors" that followed seemed a bit hollow.

THE WINNER TAKES IT ALL - A poignant song as everyone knew about the rocky marriages within the band and sensed this was about that.  Whether that is true, who knows, Bjorn once denied it.  The fact is, its a great song and again reached number 1 in the UK chart.  Led by Agnetha on vocals it is emotionally sung and is a major Pop ballad.

ON AND ON AND ON - This track is almost popping back to "Voulez-Vous" with its pumping, incessant beat.  I think it is more like an 80s Synth Rock song.  Love it even though it sounds simplistic in composition and lyrically.

ANDANTE, ANDANTE - Andante technically means "moderately slow" and the song is exactly that.  Frida sings lead vocals nicely but this song fails to lift off the ground.  It is a nice enough Europop ballad but not great Abba material.

ME AND I - Frida again takes the lead in this sometimes moody, sometimes quirky Synth Pop track.  The chorus lifts the song from being just an average Electronic track.

HAPPY NEW YEAR - A nice, relaxing, laid back, positive and hopeful sounding Pop track that has featured on many a Christmas/New Year playlist since its release.

OUR LAST SUMMER - Frida leads this musical-style Pop Rock track that again for me, fails to lift me to any height of glee.  It is nice enough but sounds, as I stated, like a musical number for the theatre not an album track.  Maybe Benny and Bjorn were experimenting for their later careers writing for musicals!

THE PIPER - A big favourite of mine, I remember buying the "Super Trouper" single and yet was playing this B-side on a loop|! I loved to sing along to the chorus and the medieval and Celtic sound of the track got me hooked.  Brilliant.

LAY ALL YOUR LOVE ONE ME - Seems to be a favourite with some Abba fans but I am not a great lover of it.  Its a decent Disco song but maybe its because I heard the Erasure cover version and it has put me off this track for life.  Listening now, although this album is ok, I can see why the band lost track a little with life at the top.

THE WAY OLD FRIENDS DO (Live) - A live version from Wembley Arena, London to finish the album.  It is very emotional and sounds great live.  As I said if this was the last song on the last album before they split it would be a fitting end.