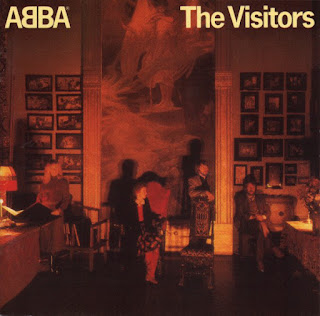 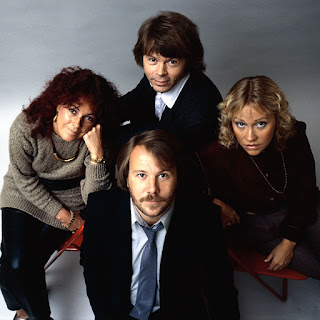 THE VISITORS - The eighth and final album before the band split opens with the title track.  Sung by Frida, its actually a great Synth Pop Rock track, reminding me of Ultravox and the like.  I did say that "Super Trouper" was the band's fitting last album but this is a track I really like.  Sometimes had the subtitle in brackets, "Crackin' Up".

HEAD OVER HEELS - Only reaching number 25 in the UK chart, thus proving that the band's awesome song catalogue was declining with fans as well as themselves.  The song is actually a cool Tango-styled Synth Pop Rock track.

WHEN ALL IS SAID AND DONE - Almost has a "The Loco-motion" beat when it starts, its a decent enough track but fails to grab the listener.  That upbeat promise is distinguished quickly into blandness.  Frida takes the lead but cannot lift this to anything more than an average Europop track.

SOLDIERS - Agnetha is back on lead vocal duties on this anti-military track.  Its a nice Pop track with a moody backdrop but trying to be positive sounding.  Some great eerie guitars on this.

I LET THE MUSIC SPEAK - A big orchestral sounding musical number sung on lead vocals by Frida.  Apparently the 5th longest Abba track coming in at 5 minutes 20 seconds.  For me, its too long and drawn out and with most of this album, seems like the Abba hit factory had lost its spark.

ONE OF US - Sung by Agnetha, the first single by the band when both couples had divorced and it proved to be their last major hit.  Released as the first single from the album, it was a wise move, probably the strongest track in my opinion after "Head Over Heels".  It reached number 3 in the UK chart but it was also their last number 1 on the Eurochart.

TWO FOR THE PRICE OF ONE - A quirky mid tempo track, unlike the usual rockier numbers that Bjorn usually takes lead on.  It sounds lazy and bored and maybe that's how the band were feeling, despite a couple of good tracks on this album.

SLIPPING THROUGH MY FINGERS - Sadly, another track that fails to lift off the ground.  A mediocre Pop ballad beautifully by Agnetha as usual but its not a great song.

LIKE AN ANGEL PASSING THROUGH MY ROOM - A really emotional and sad vocal by Frida over a sparse Acoustic Synth Pop styled track.  Its minimal backing allows Frida's vocal to shine on the very last track on Abba albums until 2021's comeback "Voyage".  If "Super Trouper" included "The Visitors", "Head Over Heels" and "One Of Us" and that was it, I would have been happier.